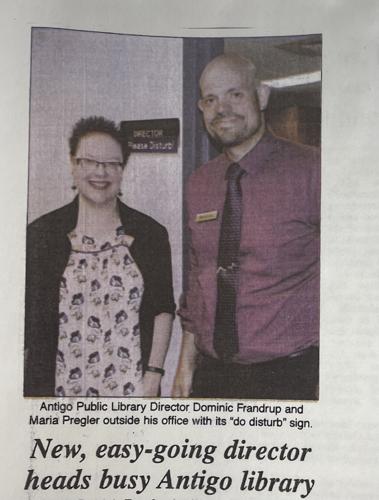 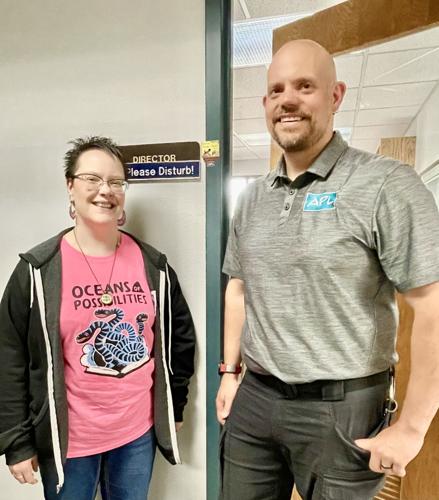 After five years, the professional relationship between Antigo Public Library assistant director Maria Pregler and director Dominic Frandrup gains an added component of friendship and remains as strong and cohesive as ever. A search to replace Frandrup offers a big challenge to the APL board.

After five years, the professional relationship between Antigo Public Library assistant director Maria Pregler and director Dominic Frandrup gains an added component of friendship and remains as strong and cohesive as ever. A search to replace Frandrup offers a big challenge to the APL board.

For many who have worked with Antigo Public Library (APL) director Dominic Frandrup, Wednesday marks a happy-sad day on the calendar.

On that day, library officials plan to close the doors to the public from noon to 1:30 p.m. as they throw a party for Frandrup.

The party’s purpose bids a fond farewell to Frandrup as he turns the page on a new chapter in his library career, departing as the APL director and charting a course across the Bay of Green Bay to where he will serve as the director for Door County’s consolidated community library system starting June 6.

At last wee’s meeting of the Langlade County Board of Supervisors, as Frandrup wrapped up his final regular library report to the board, the Langlade County representative for the Wisconsin Valley Library Board, Judy Peterson, stood to offer a few heartfelt words regarding Frandrup’s departure.

“I think we should all thank Dominic (Frandrup) for all the hard work he has done over the years, being so forward thinking, checking things out and writing grant(s),” Peterson began. “He has also been involved with the Wisconsin Valley (Library Services system); he has been involved with the state;he has done a lot of things during the time that he was (in Antigo).”

An uplifting ‘disturbance’Inside a library, “mum” is the word that rules the ecosystem of silence. Disturbances break the etiquette of quietude ... Usually.

As such, the word “disturbance” often carries negative connotations. But pick up any book on ecology from APL’s stacks, somewhere within its pages the idea that disturbances can lead to more resilient and diverse wildlife systems will likely occupy a section or two.

And at APL, for the last five years, when it comes to making library improvements, connecting to patrons, diversifying technologies and programs and enriching the community, one might say that Frandrup trusts the science of disturbance.

Indeed, since Aug. 7, 2017, when he first took the position, an incarnation of the very word, “disturbance” remained posted on the wall just outside his office, urging those with a question, comment or idea to enter through his open door and to bring their curiosity

“Please disturb,” the sign next to his office door reads, as noted in the Antigo Daily Journal article from 2017 that first welcomed Frandrup to Antigo. One might go as far to define his time in Antigo as a series of positive and beneficial disturbances that helped to refortify a vital public service for county residents.

“He just worked so hard to do as much as he could for the library and its patrons,” said Linda Szitta, APL board president. “We are very sorry to see him leave because he brought leadership; he brought a very positive culture; and he succeeded in making APL much better now than when he came.”

In 1894, Samuel Clemens (Mark Twain) penned a letter to the Millicent (Rogers) Library in Massachusetts. That letter stated: “A public library is the most enduring of memorials, the trustiest monument for the preservation of an event or a name or an affection; for it, and it only, is respected by wars and revolutions, and survives them.”

For the last three years Szitta has served as president on the Antigo Public Library Board, and before that, she frequently stepped among its calm and quiet shelves as a library patron, browsing its many pages and programs that help instill youths and adults with knowledge, history, science and adventure. But only in her last three years on the board did a deeper revelation of the library’s value occur to her, one that reiterates Twain’s aforementioned quote.

“I had no idea the magnitude of services a library performs in a community,” she said. “I had know idea the payback you get for having a library.”

Benefits and challengesWhen it comes to instilling an economic edge in Langlade County, APL catalyzes a strong return on investment (ROI). In Antigo, for each tax dollar spent on the Library, the ROI compounds to $4.75—above the state average of $4.09. Moreover, APL averaged nine in-person programs per month in 2021 that range from adult education, to tax season assistance, to youth reading. With participation in those programs sitting at a median of 19 attendees per program, library patrons retain ample use and benefit from APL. And that says nothing of the 97 self-guided library programs and 43 pre-recorded programs APL offers. Additionally, more than 58,000 books and audiovisual materials in its collection regularly rotate through branches in White Lake and the Town of Elcho.

In short, the APL ROI becomes about much more than just dollar signs. It reflects education and the fact that the APL staff make up the teachers and library promoters.

“The library is super lucky to have the staff and dedicated people that we have,” Frandrup said. “Whether it’s finding a book, looking for an article, setting up meetings, or helping someone with their taxes—think of all the things we do as a library … the library is a very busy and vibrant place and that’s what I love about it.”

Frandrup pointed out in 2021 that APL served 8,811 registered users (45% of the county’s population). Additionally, it continues to foster strong relationships with more than 45 community partners that help to provide everything from internet and computer education to fighting hunger.

In recent years, library funding introduced some challenges to acquisition of resources and operations. Operating under a unique city-county joint funding system that provides the library with $306,690 from the city and the another $306,690 from the county annually, over the last 11 years revenue at the library remained relatively flat even as operational expenses have increased for items like heat, electricity, internet access and other materials. At one point, failure to receive increases in funding led to a decrease in operational hours at APL.

However, Szitta lends a significant portion of the success to Frandrup in overcoming those funding hurdles. She highlighted the flourishing new projects, programs and technologies. In only the past month, his grant writing efforts garnered $260,000 for library projects. One of those grants included a $230,000 Wisconsin Public Service Commission grant for an upcoming and innovative solar panel project at APL that will help supplement energy consumption at the APL facility.

So, despite the challenges, under Frandrup’s leadership, APL stands on a solid foundation from which to face future funding issues while it continues uplifting and enriching Langlade County residents.

But Frandrup also cautioned that such a community resource does not happen without investment.

“The library has been flat-funded for (11) years, and unless that changes it will be in trouble,” he said.

Through it all, including a pandemic, Fandrup managed to remain an active community member outside the workday hours. He served as the vice president and an active member of the Jack Lake Silent Sports Club that established and maintained an elaborate mountain bike trail system at Veteran’s Memorial Park.

The heartfelt voidFinding a replacement for Frandrup might pose a difficult challenge for county and city appointees of APL’s board. To serve as a library director, candidates must possess a Grade 1 library certification, meaning that an individual holds a master’s degree in library sciences from a program accredited by the American Library Association (ALA) as well as certification through the Wisconsin Department of Public Instruction. Adding to the challenge, Frandrup pointed out that in Wisconsin there are only 106 Grade 1 certified librarians.

“But the things that (Frandrup) has done for the library puts us in a good position for attracting those applicants,” Szitta pointed out.

Until the board finds a candidate, Maria Pregler will serve as interim director, while also retaining her current duties as APL’s assistant director. As part of a library partnership, Pregler also works as a system cataloger for two other libraries. So for a time, her plate will be full. She has been with APL for almost 12 years, serving as assistant director for five.

A bonded friendship and professional partnership becomes instantly apparent when Pregler and Frandrup are present in the same room.

Upon an inquiry about how the world of APL will look after Frandrup departs, they answered in a rapid and unrehearsed synchrony of thought:

Then, in a few more words, Pregler described a unique working relationship that has helped to keep the library a valuable and vital asset for the community.

“This is probably the best working relationship that I have ever had in my working career,” she said. “Sometimes we just look at each other and know what the other person is thinking, and I am going to miss that.”

Szitta said the APL Board is working with the human resource department at the city of Antigo to find qualified candidates. The position was approved for hire during the last library board meeting and will be advertised online and in the newspaper.

Check your email for details.

Submitting this form below will send a message to your email with a link to change your password.

An email message containing instructions on how to reset your password has been sent to the e-mail address listed on your account.

Your purchase was successful, and you are now logged in.

A receipt was sent to your email.