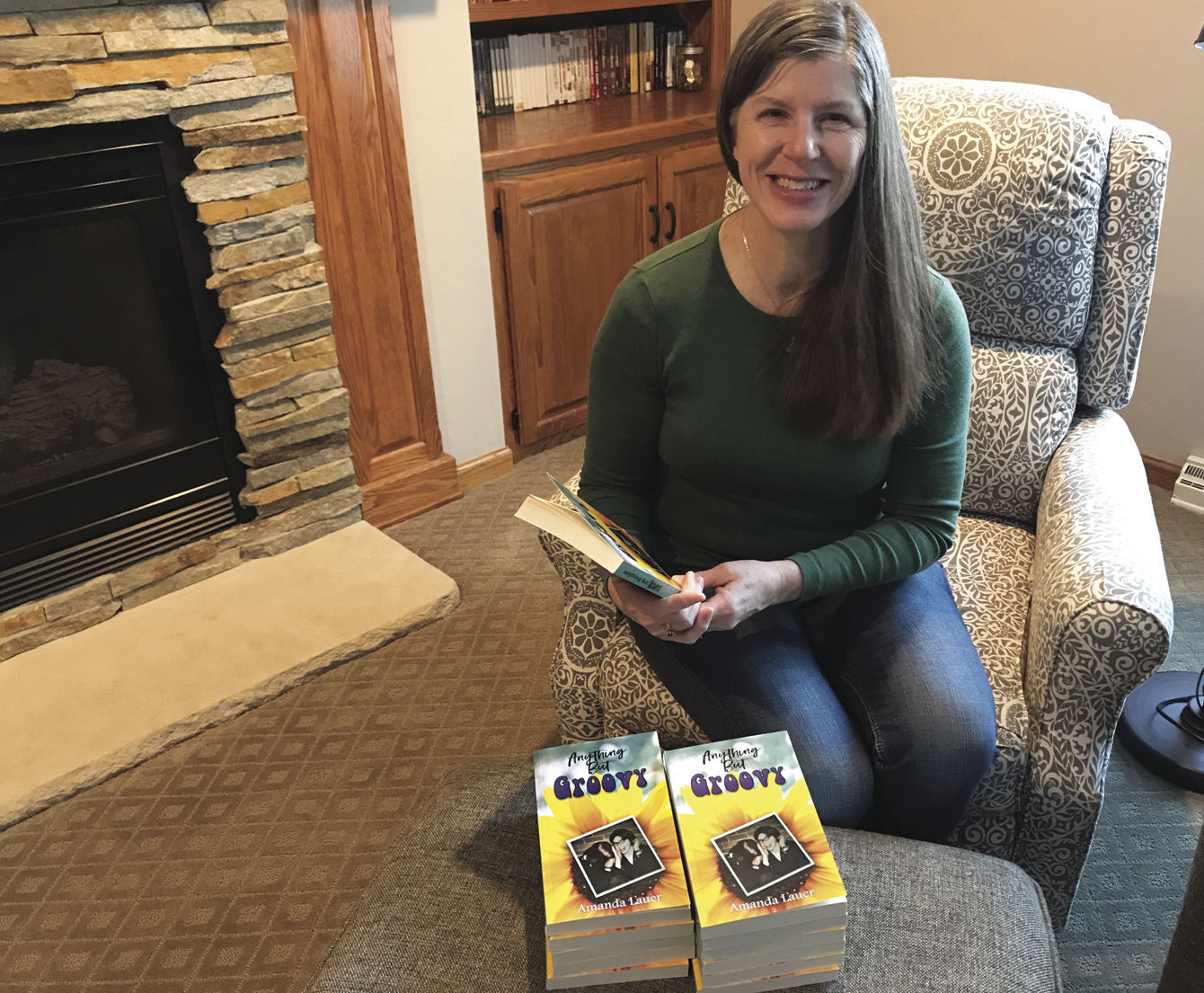 Amanda Lauer shows off her latest novel, “Anything But Groovy,” filled with memories of her growing up in Antigo in the 1960s and 1970s. Her writing career includes proofreading, copyediting freelance writing, several novels and work in the film industry. 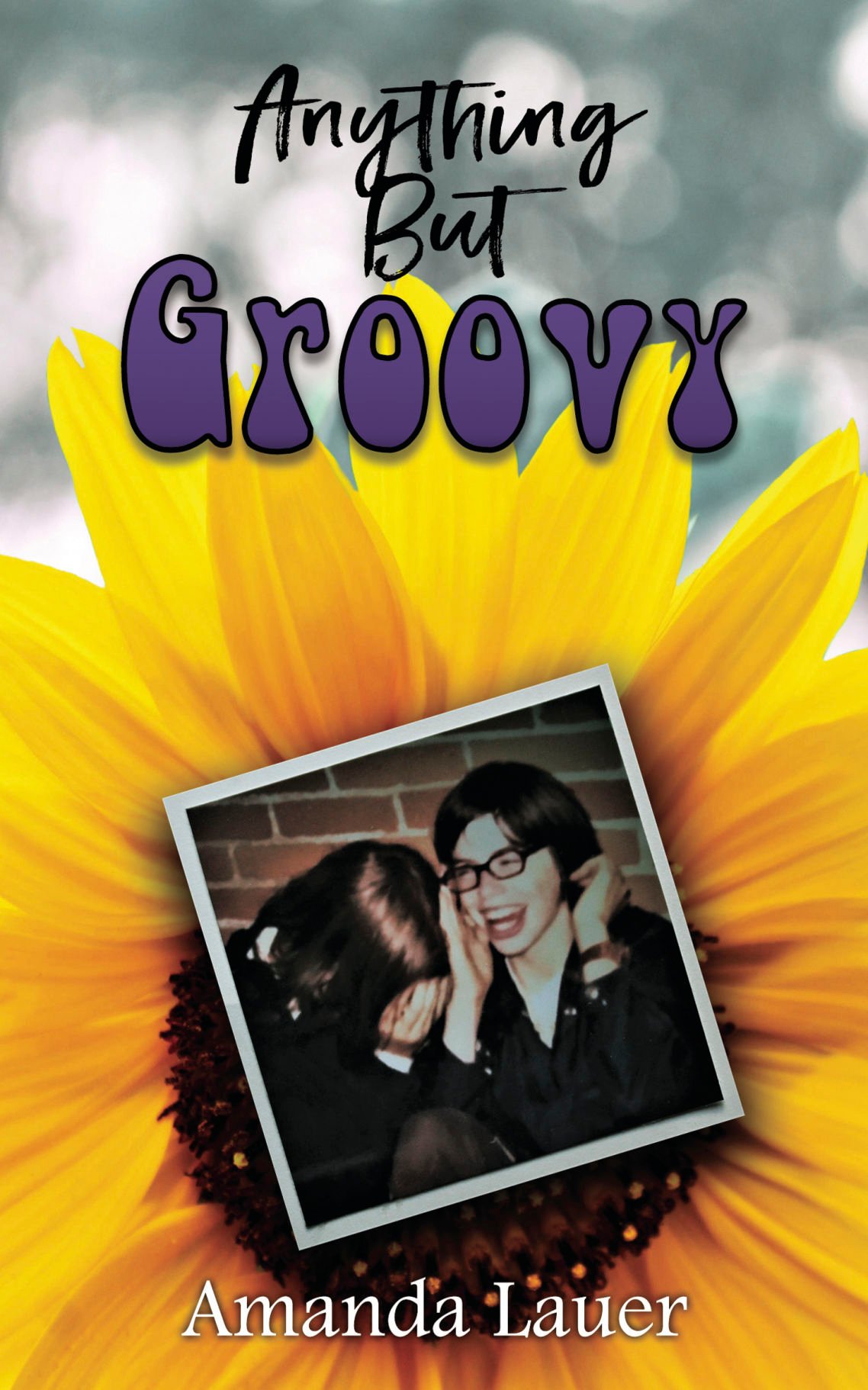 The front cover of Amanda Lauer’s novel “Anything But Groovy” shows her and her friend, Deb (Ofsthun) Sell (from the middle 1970s) having fun on the porch of the house Lauer grew up in (205 Virginia St.). Photos with friends and family from that time era are on the back cover as well.

Amanda Lauer shows off her latest novel, “Anything But Groovy,” filled with memories of her growing up in Antigo in the 1960s and 1970s. Her writing career includes proofreading, copyediting freelance writing, several novels and work in the film industry.

The front cover of Amanda Lauer’s novel “Anything But Groovy” shows her and her friend, Deb (Ofsthun) Sell (from the middle 1970s) having fun on the porch of the house Lauer grew up in (205 Virginia St.). Photos with friends and family from that time era are on the back cover as well.

Amanda Lauer’s latest book, “Anything But Groovy,” is filled with names and places that will probably be familiar to anyone who lived in Antigo in the 1960s and 1970s. And for those who didn’t live here then, the book is still packed full of good writing and stories anyone can relate to.

Thirteen-year-old Morgan is unwillingly sent back in time to the year 1974 and has to live in her mom’s body at the same age and experience small-town ‘70s life, which isn’t quite as cool as she’d hoped it’d be. That’s the premise behind Lauer’s novel.

“Originally, I had thought of writing a coming-of-age book set in the 1970s tapping into my memories of that era and some experiences I’d went through back then,” Lauer said. “A fellow writer suggested that I write a book that was a cross between ‘Freaky Friday’ and ‘Back to the Future’ and tell the story of a teenager from modern times who is yanked back in time and has to live her mom’s life at the same age back in 1974. The idea was this story would appeal to both younger readers and people who’d grown up in that era and would enjoy the pop cultures references and walk down memory lane.”

That has proven to be the ideal manuscript. Young teens through seasoned adults have read the books, and it’s been well-received by people of all ages, Lauer said.

“Baby boomers have asked if I had access to their diaries from back then, because so much of what I described reflected their life experiences,” she said.

Because Lauer lived in Antigo in the 1960s and 1970s, she drew from her memories of places and events that were part of her life then such as St. John School, St. John Parish, Antigo Junior High School, shopping at F.W. Woolworth Store (Woolworth’s) and Vosmek Drug Store, learning to cook and sew at home ec classes at the high school, eating at Sandy’s (which later became Hardee’s), attending football games at the city stadium and basketball games in the high school gym.

To make the book more universally appealing, no name is given to the city or stores, and the school that Morgan attends was christened St. Joseph School.

“The interesting thing for Morgan is that she lives in the same house that her mom grew up in, attends the same school and the same church, but it’s all happening 40-some years earlier (and her grandparents and uncles are now her parents and brothers),” Lauer said. “The hard part for her is that she knows how some people’s lives will turn out (the people who still live in town) but she doesn’t want to do anything to alter their futures, so she doesn’t interfere or intervene in their lives, as much as she’d like to at some points.”

Lauer’s father (Kieran “Joe” Purcell) was in the military, so she lived in several different areas growing up. His longest assignment was at the Antigo Air Force Station, so she lived in Antigo from age 2 until 15. After her freshman year at Antigo High School, the family moved to Minnesota, but within two years, they moved to Appleton, and Lauer graduated from Appleton West High School.

“I went to college at UW-Madison to study chemical engineering, got engaged after my first semester, left school and went into the proofreading field,” she said. “After four years of proofreading in the insurance industry, I took 15 years off, in essence, to be a stay-at-home mom for our four children.”

She returned to proofreading for the newspaper industry in 1999 and learned to write articles. The newspapers shut down after the Sept. 11 terrorist attacks, so Lauer went into freelancing in 2002, writing for newspapers and magazines, proofreading and copyediting. She published her first novel in 2014.

“My purpose in life is to write wholesome, unforgettable stories that align with my faith and values to touch the hearts of countless people worldwide,” Lauer said.

“Writing for a local newspaper, I interviewed a man whose great-great-great uncle had fought in the Civil War,” Lauer said. “His experience was so unusual that I thought someone should write a book about that. Using that war hero’s story as the base for first manuscript, I wrote a book in the style that I loved to read.

“I thought it was one and done, but within the first week of the book being published, people started asking me when the sequel was coming out. Tens of thousands of copies of the books have been purchased or downloaded and there’s been interest in turning this series into a movie or set of movies or a limited-run television series on a streaming service.”

Lauer has also contributed to books penned by other authors. She is also working in the film industry and received the 2020 Best Writer award (Red Letter Awards) for her work on the movie “The Islands.”

Her mother, Jackie Purcell, is talented in art, sewing and crafts. Her older brother, Gordon Purcell (AHS class of 1977), is a professional comic book artist who has drawn “Star Trek” and numerous other comic books since the 1980s. Her brother, Rodney, (who died in November) was artistically talented as well.

Lauer hopes to scheduled book singings, including one in Antigo, later this year. She is also finishing a time travel book about a teenage girl from modern times who is struck by lightning while working at a golf course and travels back in time to the oldest golf course in the world (St. Andrews in Scotland) and has to negotiate life, love and the aftermath of the Massacre at Glencoe in 1692. A fifth book in the “Heaven Intended” series is on the horizon. And then there is the film industry and newspaper freelancing.

“My husband John and I will be welcoming our seventh grandchild and celebrating our 40th wedding anniversary with the trip of a lifetime, assuming that the COVID situation is under control by this fall,” Lauer said. “John and I say every day how lucky and blessed we are. It’s truly been a wonderful life for us, and we’ve got a lot more coming up on the horizon. Each day is a new adventure.”