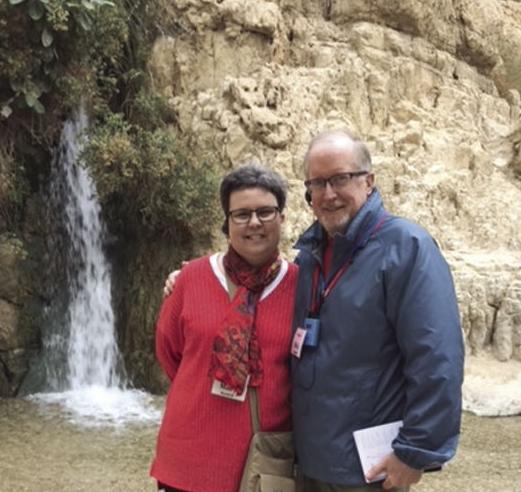 The Rev. Dick Kendall and his wife, Mary, visited Ein Gedi, Israel, in January 2018 on a trip to the Holy Land. 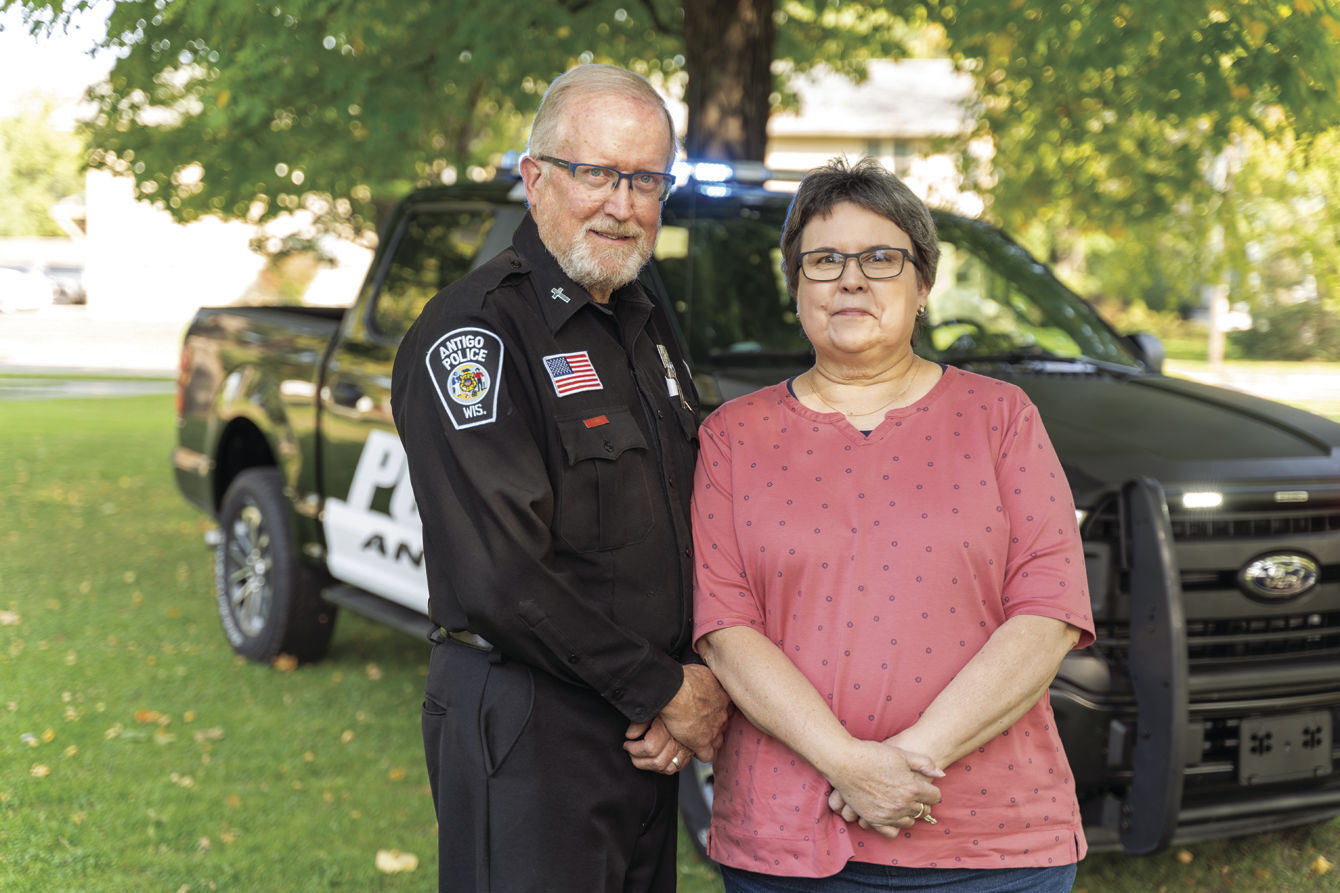 The Rev. Dick Kendall and his wife, Mary, stand in front of the Langlade County Courthouse in 2020. The pastor also serves as one of two chaplains with the Antigo Police Department and Langlade County Sheriff’s Office.

The Rev. Dick Kendall and his wife, Mary, visited Ein Gedi, Israel, in January 2018 on a trip to the Holy Land.

The Rev. Dick Kendall and his wife, Mary, stand in front of the Langlade County Courthouse in 2020. The pastor also serves as one of two chaplains with the Antigo Police Department and Langlade County Sheriff’s Office.

Sunday was a bittersweet day for the Rev. Dick Kendall. It marked an end a new beginning for him.

After the better part of the last decade, Kendall stepped aside as minister at First Baptist Church, urging the congregation to look to the future.

In March 2020, I announced to the congregation at First Baptist Church that I would be vacating the pulpit in early January 2021,” he said. “The Bible says, ‘… but one thing I do: Forgetting what is behind and straining toward what is ahead …’ (Philippians 3:13). A pastor could develop a series of messages on that selection of Paul’s letter to the Philippians, but as I leave the pulpit at First Baptist Church, it is important for the church members to not look back, but rather to embrace what is ahead. I need to move forward, and the congregation needs to do the same.”

Kendall was born and raised in Green Bay. He attended a Methodist church and was president of the Methodist Youth Fellowship group in high school. He purchased a 4-acre piece of property in the Nicolet National Forest in 1970 while attending college. Eventually, it became the site of his cottage building.

Kendall married his high school sweetheart, Mary, in June 1974 after dating through high school and college. They raised three children in Appleton. Mary Kendall worked for a paper company until the children were born; then she took time as a stay-at-home mom. She returned to work when the children were in school full days.

Most of Kendall’s professional career was in human resource management and marketing in the insurance industry and in the manufacturing sector.

His road to the pulpit is unique.

“My mother-in-law got me started doing ‘pulpit supply.’ It was 1990,”he said. “The pastor at their church in Lakewood needed a person to occasionally fill the pulpit when he was traveling, out sick or attending seminars. She told her pastor, ‘My son-in-law would be glad to do that.’

“My reply would have been, “Hello, Mom. Do you want to ask me first?’ I did, however, listen to (the pastor’s) explanation defining his need for a supply pastor on occasion. The church was a three-point parish with churches in Lakewood, Wabeno and Laona. I agreed to give it a try. I filled in on two Sundays, about six weeks apart. When I drove to the Northwoods from our Appleton residence, I would stay at our cottage near Mountain.”

Then, tragically, the pastor suffered a massive stroke and never returned to the pulpit.

“Although employed full-time in Appleton, I agreed to fill the pulpit two Sundays per month. I did so for 18 months until a pastor accepted a call to the pulpit.”

Kendall believed his life in the ministry was done, until one day shortly thereafter when an 80-year-old woman approached him in the grocery store in Lakewood. Her church (a two-point parish in Athelstane and Wausaukee) had a pastoral vacancy. She had heard Kendall did pulpit supply and asked if he could help them.

“I agreed to do so and filled the pulpit several times over the next 12 months,” Kendall said.

Once more, Kendall believed he was done.

“A church in White Lake asked for some help, and for 16 years, I filled in one Sunday a month,” he said. “I also responded affirmatively to requests from Appleton, Green Bay, Center Valley, Kaukauna, etc., over those years.”

In October 2013, he was asked to conduct a Sunday service at First Baptist Church in Antigo. A request to “come back next week” led to 14 months of supplying that pulpit.

So, is he really done this time?

“I very much enjoy sharing God’s Word with people. We are instructed in Acts 1:8 to ‘be witnesses in Jerusalem, in Judea and Samaria, and to the ends of the earth,’” Kendall said. “I will consider various pulpit supply opportunities that may present themselves going forward.”

However, he does have actual plans for retirement.

“Mary and I will do a bit of traveling and will knock a few things off the bucket list,” he said. “I want to work in my shop and create some things from reclaimed wood, do some kayaking, fishing, reading and biking.”

Mary Kendall said just because her husband will be home, she doesn’t believe his schedule will change much.

“Dick has been blessed by the Holy Spirit with various gifts, and he works passionately to evangelize, teach and shepherd the lost and those already saved,” she said. “His leadership strengths and zeal for service benefit the church and community. We will enjoy our time together relaxing, visiting family and friends and doing God’s work.”

Kendall will miss the church members but not necessarily the drive from to church, especially in the bad weather.

“I will miss the interactions with those church members and regular attendees who genuinely love God and His son, Jesus Christ, and are serious about their walk with Him. Mary and I have many friends who have been an encouragement to us in our attempts to be effective in the pastoral role. Encouragement in this capacity is very valuable, important and much appreciated,” Kendall said. “These past few months, travel on the roads has been good. I won’t miss driving 35 miles in the fog, and on snowy and icy and road surfaces.”

A funny thing happened on the way to church …

After hundreds of sermons at several parishes across the area, the Rev Dick Kendall has more than one funny story to tell.

The first one involves the police.

“When filling in the pulpit at the three-point parish in Lakewood, Wabeno and Laona, I needed to watch the clock carefully,” he said. “Sometimes I had to push the pedal to the metal when traveling from one location to the next to arrive on time. One Sunday, upon leaving Wabeno, I needed to move. Fast. As I recall, the speedometer said I was doing close to 80 mph in a 55 mph zone. I met an officer that morning; go figure.”

Kendall told the officer he was needed at the pulpit in Laona for the start of the 11 a.m. service.

“He said that if I could show him a printed bulletin with my name printed on the page, he would give ‘forgiveness’ consideration to my situation,” Kendall said.

Luckily, he had a church bulletin with him.

“The kind cop escorted me to the church with his bubble lit upon his car top, but no siren,” Kendall said. “He did not give me a ticket. As I was walking away, he stated loudly for many to hear, “Hey, Pastor, if this happens again on my watch, you will pay the fine!’”

A second story is from a time in late February when filling the pulpit in a White Lake church.

“I was going to use a songbird house I had constructed as a visual aid when doing the ‘Message for Young Christians.’ I made the birdhouse with a hinged door on the front for cleaning it out each season. My message was to relate to Matthew 10:29 which says, ‘Are not two sparrows sold for a penny? Yet not one of them will fall to the ground outside your Father’s care.’

“When I was at the cottage the morning of the worship service and about ready to leave for church, a small purple finch smacked the window of the sliding door and dropped into the snow. I went out and picked it up; it was very, very dead. Thinking it would add an effective additional visual for my children’s message, I opened the door of the birdhouse and laid the bird inside. I drove to church. The service progressed from the start to the time of the message. As I stepped forward to address the kids, the very dead bird became very alive, popped out the entrance hole and flew to the front of the church and perched on the cross.”

After the service, one church elder approached him and asked, “What are you going to do next week for an encore … bring a squirrel!?”

Eventually, the bird was coaxed out the church door and lived to tell his own story.