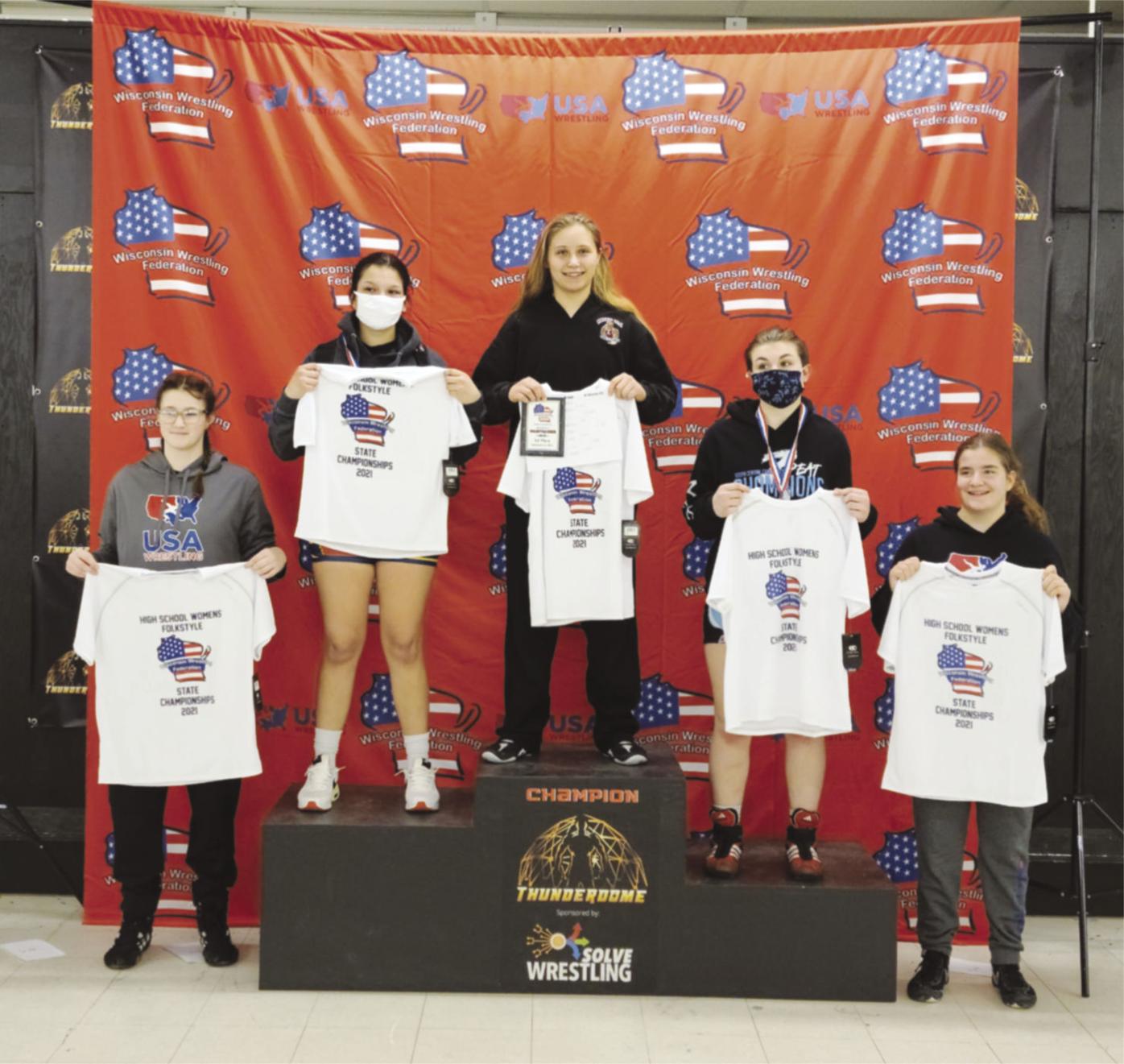 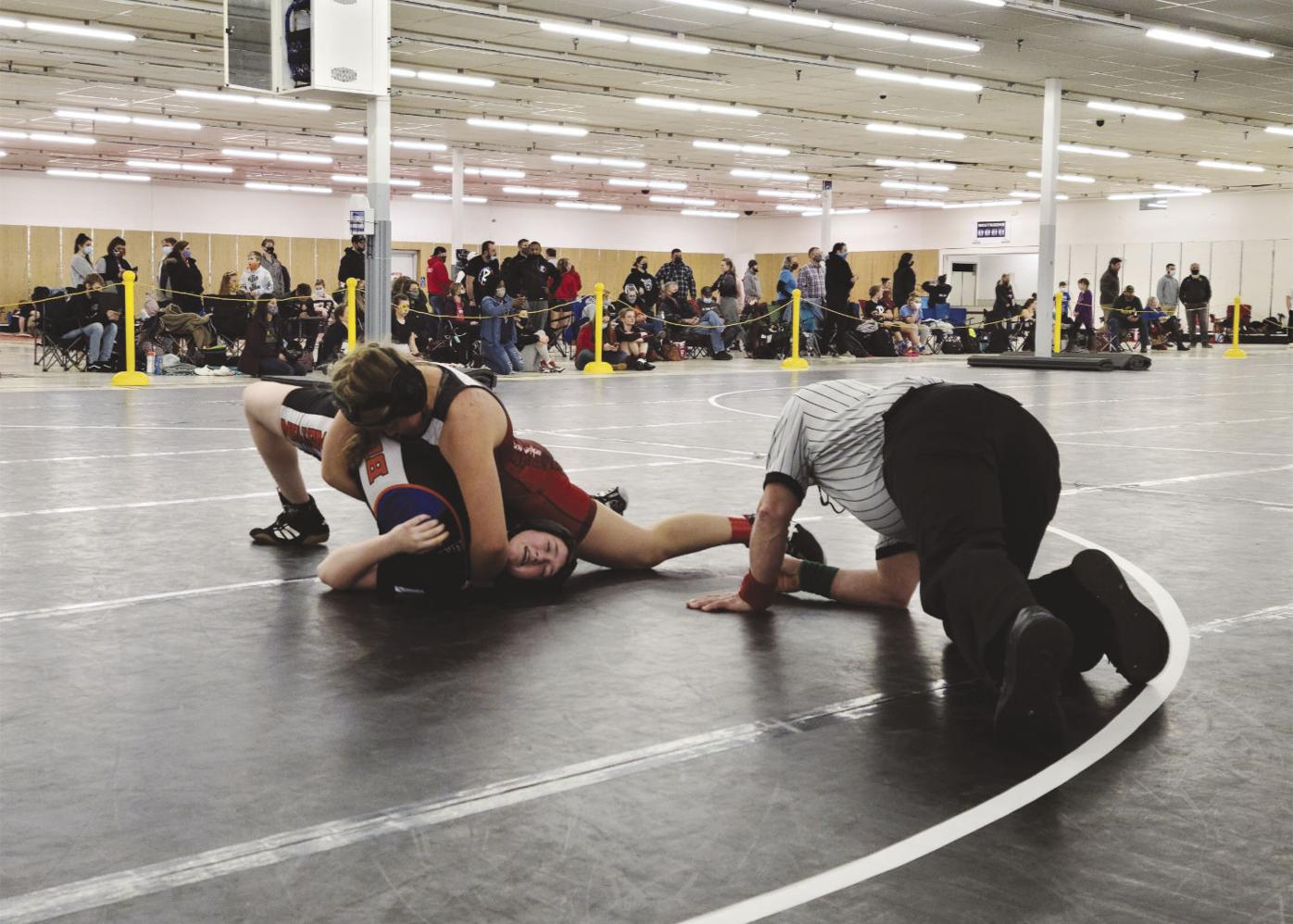 Antigo’s Alex Hofrichter, top, secures the win over Lillian Riggle of Burlington in the semifinal match of the women’s 152-pound bracket at the Wisconsin Wrestling Federation Folkstyle State Tournament, held in Oconomowoc on Sunday.

Antigo’s Alex Hofrichter, top, secures the win over Lillian Riggle of Burlington in the semifinal match of the women’s 152-pound bracket at the Wisconsin Wrestling Federation Folkstyle State Tournament, held in Oconomowoc on Sunday.

Just a Sophomore, Hofrichter is already gaining attention around the state, and now has back-to-back state championships.

Hofrichter’s day started with a match against Jade Herzer of Wisconsin Dells. Herzer won the 138-pound bracket last year, was a champion at 132 pounds in 2019, and in 2018 she placed first at 138. Hofrichter knew she had a very formidable foe in the first round, but refused to allow Herzer to win her fourth state crown.

The match started with Herzer gaining control with a collar tie with her right hand, and a sweep single on Hofrichter’s right leg to gain a takedown and a 2-point advantage 14 seconds into the match. Hofrichter was able to mount a multitude of near scoring opportunities from the bottom, eventually using wrist control to secure a single leg and score a reversal with only four seconds left to tie the match at two heading into the second period.

After Herzer deferred, Hofrichter chose to start on the bottom. From there, she was able to execute a several stand-up attempts, but Herzer maintained control and returned her to the mat. Herzer then used a strong right-handed chop to break Hofrichter down and ride her out for the remainder of the period.

With the score tied at two, Herzer decided to start the third period in the neutral position. Here Hofrichter was able to use her conditioning advantage and a Russian tie to remove Herzer’s right-handed collar tie. From there, Hofrichter transitioned from the Russian tie to a left-handed overhook, and launched her opponent straight to her back, leading to the pinfall victory 21 seconds into the third. A very ecstatic Hofrichter took a quick moment to celebrate her victory, but then started to focus on her next opponent.

That next opponent was Lillian Riggle of Burlington. Due to a lack of female events this year, wiwrestling.com, the site most often looked to for rankings, has not released updated rankings this year. Going off of last year, Riggle is the top-ranked individual at 152/160 pounds, so Hofrichter knew another tough match was in front of her.

Riggle had a visible height and reach advantage, and used that to secure a takedown on a go behind off of her shot attempt 64 seconds in. Hofrichter then used her scrambling ability on the bottom to secure a navy ride and scored a reversal with 28 seconds to go in the round. Hofrichter then controlled the top position the rest of the period.

Entering the second deadlocked at two, Hofrichter decided to start on the bottom. Once again, Hofrichter showed off her mat awareness, and secured a wrist and an inside single leg to reverse her opponent 32 seconds into the period. From there, Hofrichter nearly scored with a half nelson, but was only able to briefly maintain the position. Hofrichter then secured a near side armbar with far side wrist, and was bumped Riggle’s hips to put her opponent in danger. This led to three nearfall points being awarded to Hofrichter. who was then able to ride out the remainder of the period, and took a 7-2 lead into the third.

Wanting nothing of Hofrichter on top or bottom, Riggle chose to start the third period in neutral. Hofrichter refused to sit on her sizable lead, and instead continued to push the pace, and eventually snapped down her much taller opponent, secure a front headlock, and then the near leg for a takedown with 42 seconds to go in the round. More tough riding on top followed for Hofrichter. Who then hit a step through on the near side foot, and used that to set up a half nelson, pinning Riggle at 5:58. Had she not secured the pinfall, Hofrichter would have won 12-2, in a very dominant match.

The finals saw a match up between Hofrichter and Elicia Leonard of Wisconsin Dells, who placed second last year at 152 pounds. Leonard had advanced to the finals with a quick 24 second pin off of a head throw in the semi-finals.

The first period started with Leonard gaining control with a left-handed underhook and good head position. Leonard went for the same head throw that got her to the finals, and Hofrichter was able to sink her hips and pop her head out, gaining a takedown in the process. Once Hofrichter was on top, she started to assert her dominance. She continually kept her opponent broken down, and then secured a nearside armbar and far side wrist, leading to a pinfall victory 1:42 into the first round.

The future is bright for the young Antigo wrestler. The state championship automatically qualifies Hofrichter for a national tournament in Iowa, where she plans on testing her skills against the best in the nation.

Alexandra Hofrichter’s place is 1st and has scored 26.0 team points.