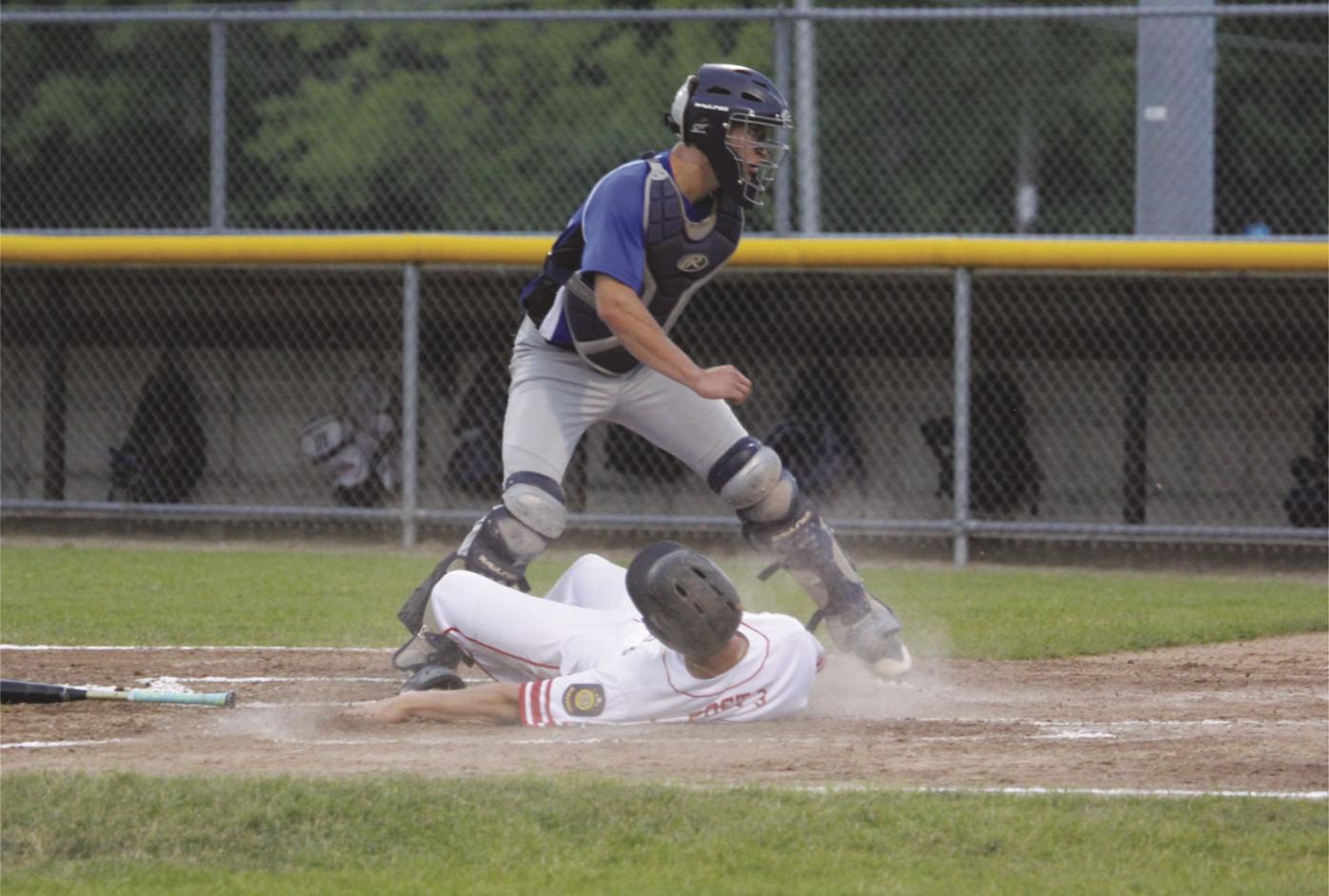 Antigo’s Eli Fleischman slides safely home after a Logan Thomae double in the third inning Wednesday night at Kretz Park, while Waupaca catcher Tyler Rogney looks for the ball. Both Fleischman and Thomae had two hits in a 5-4 American Legion win for Antigo. 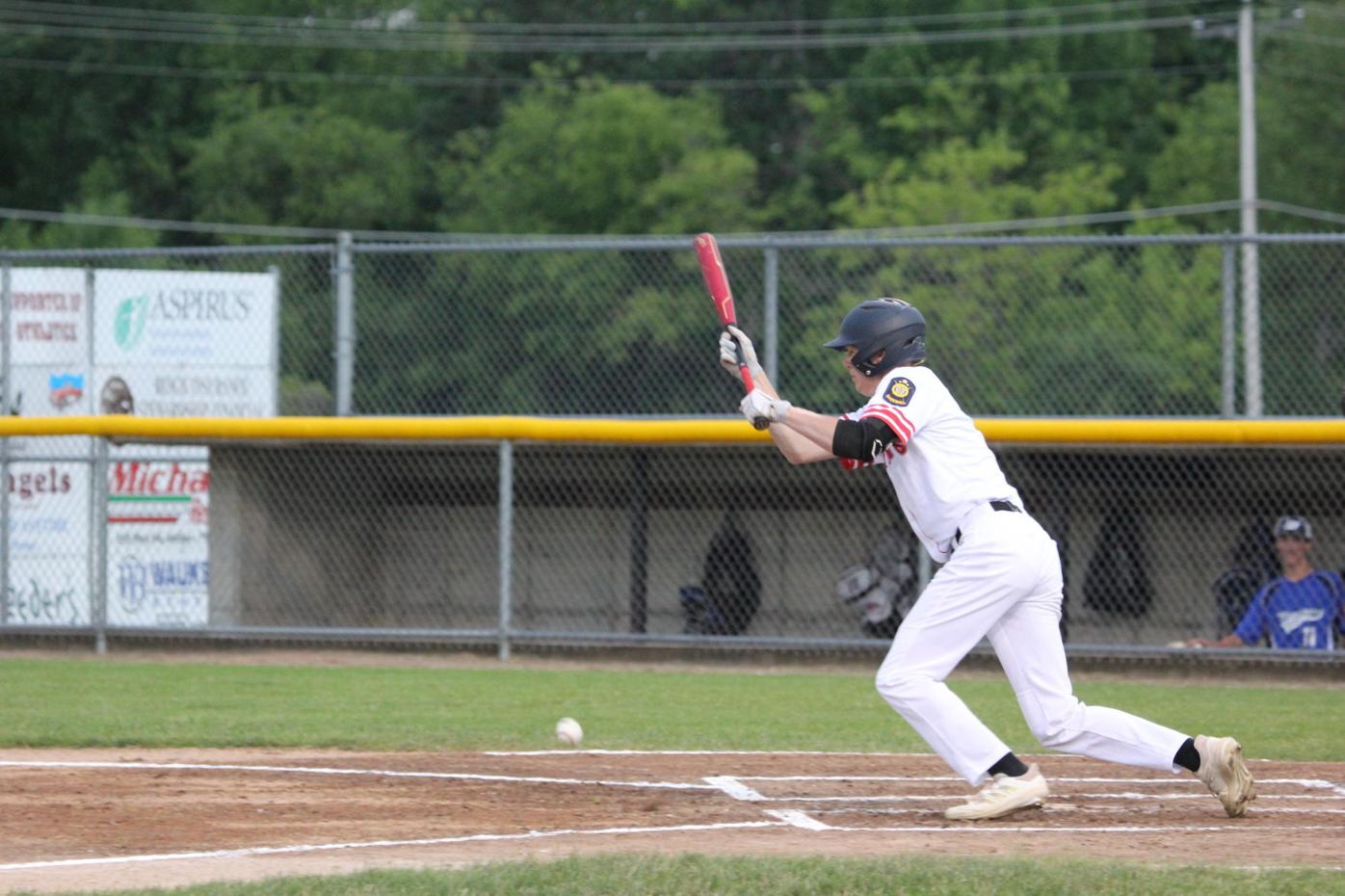 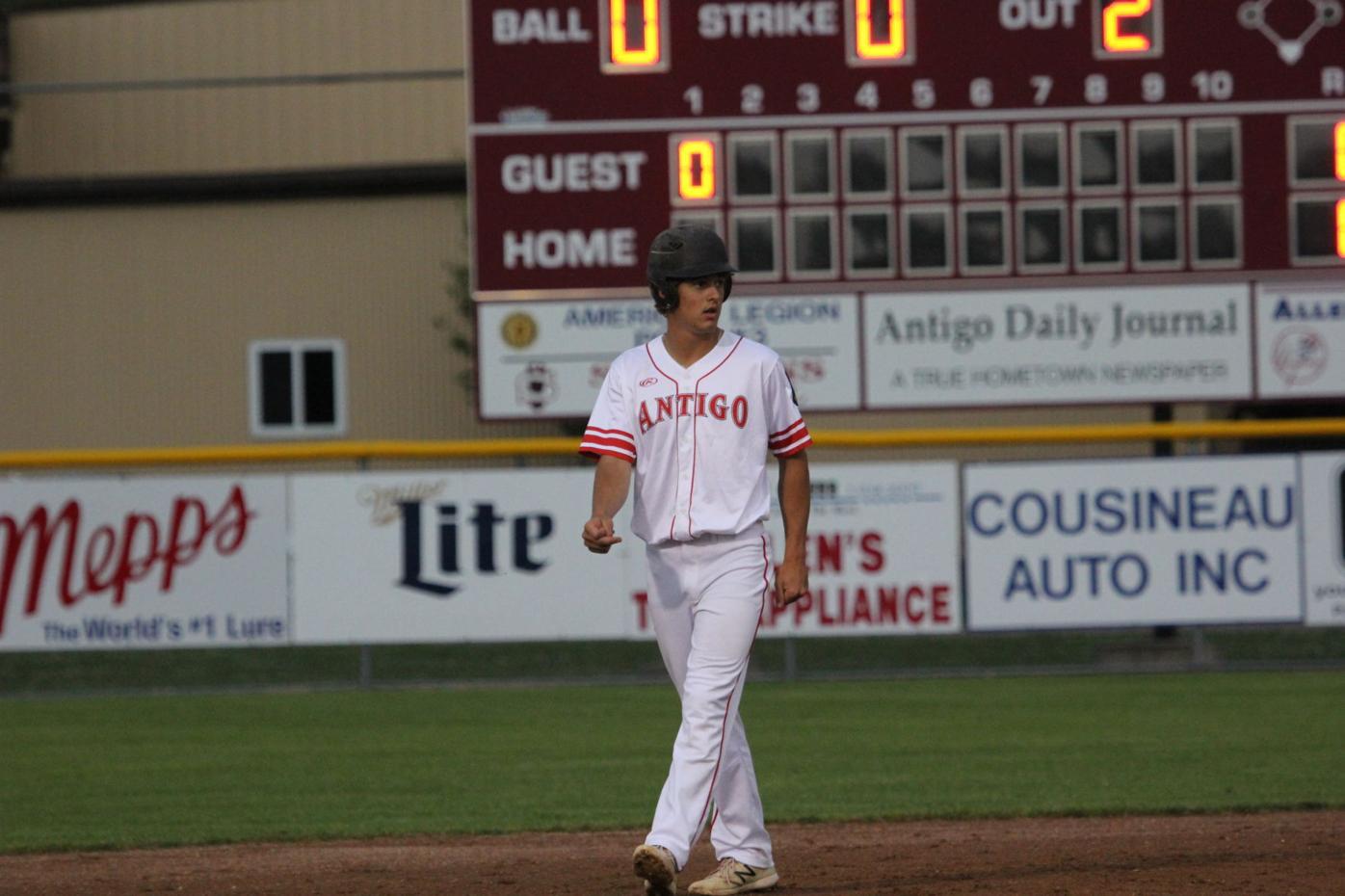 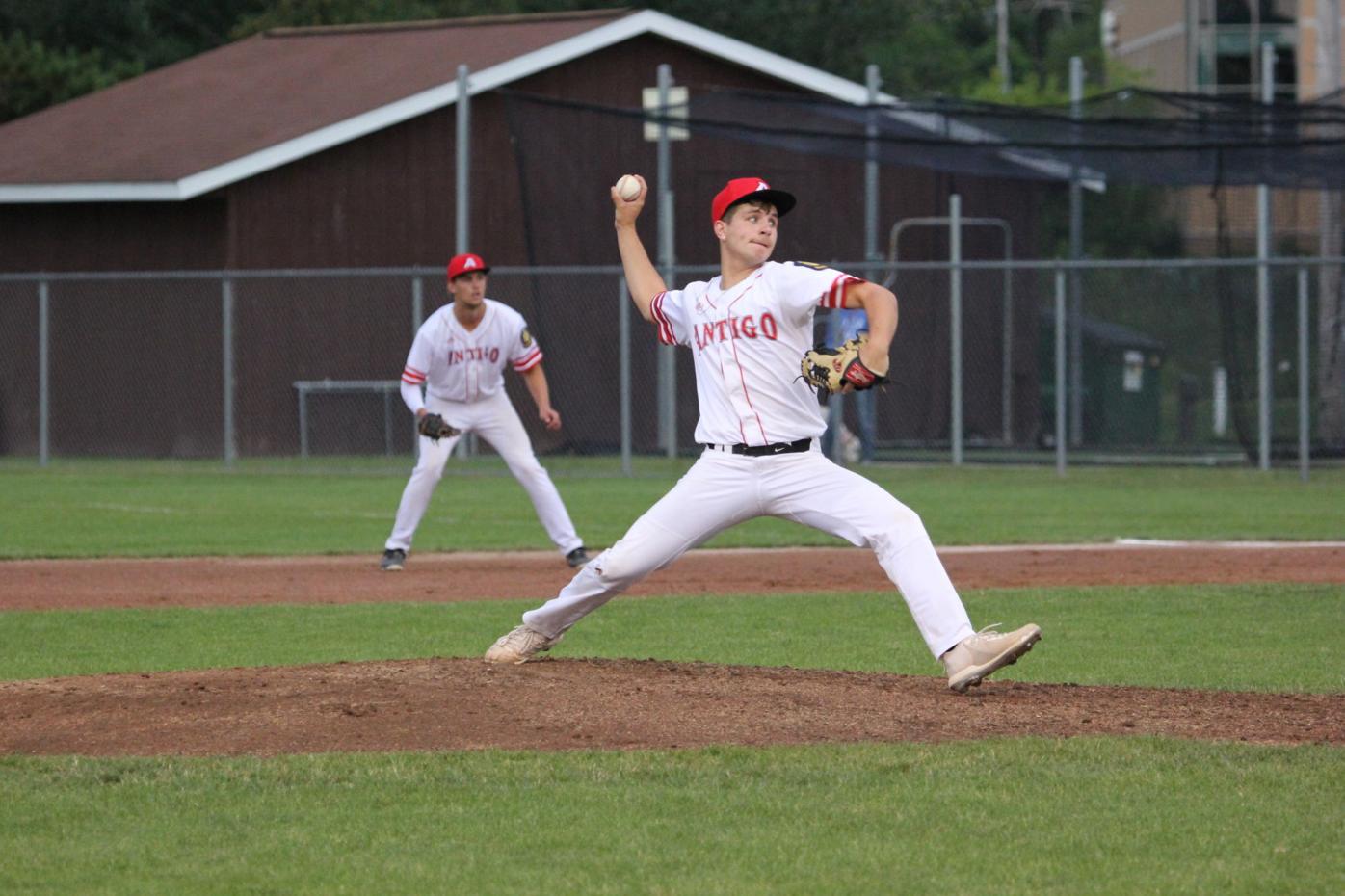 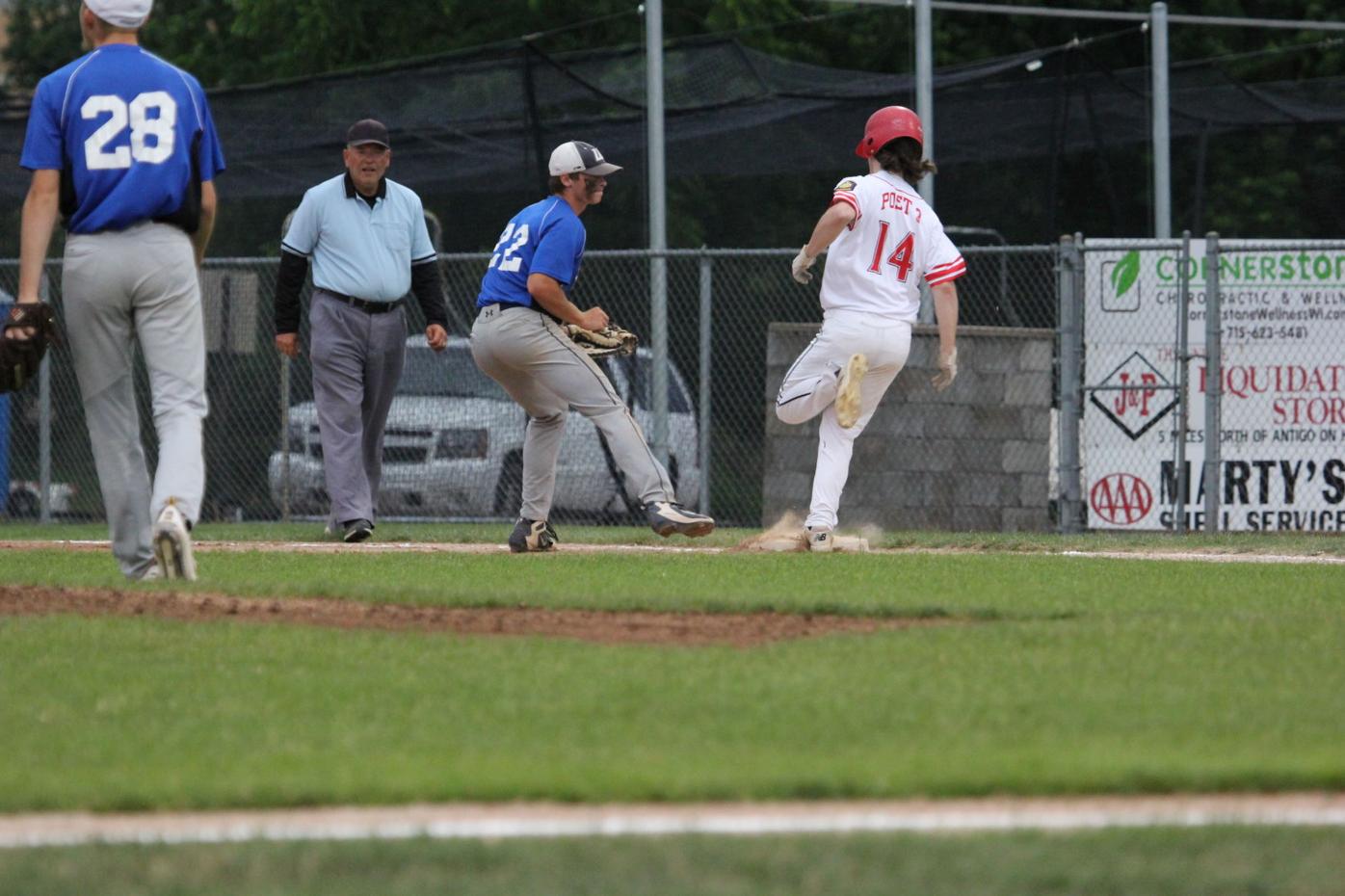 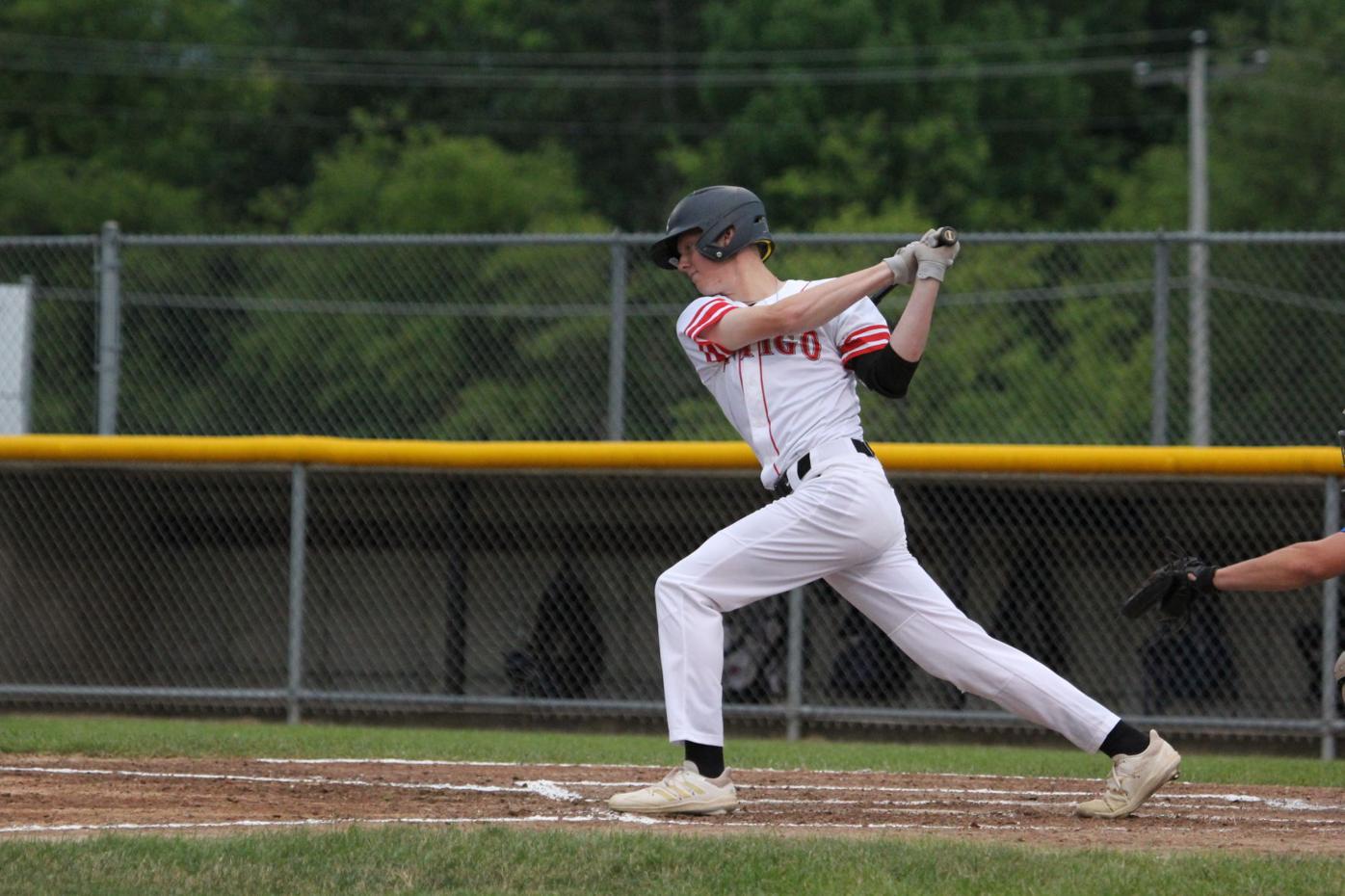 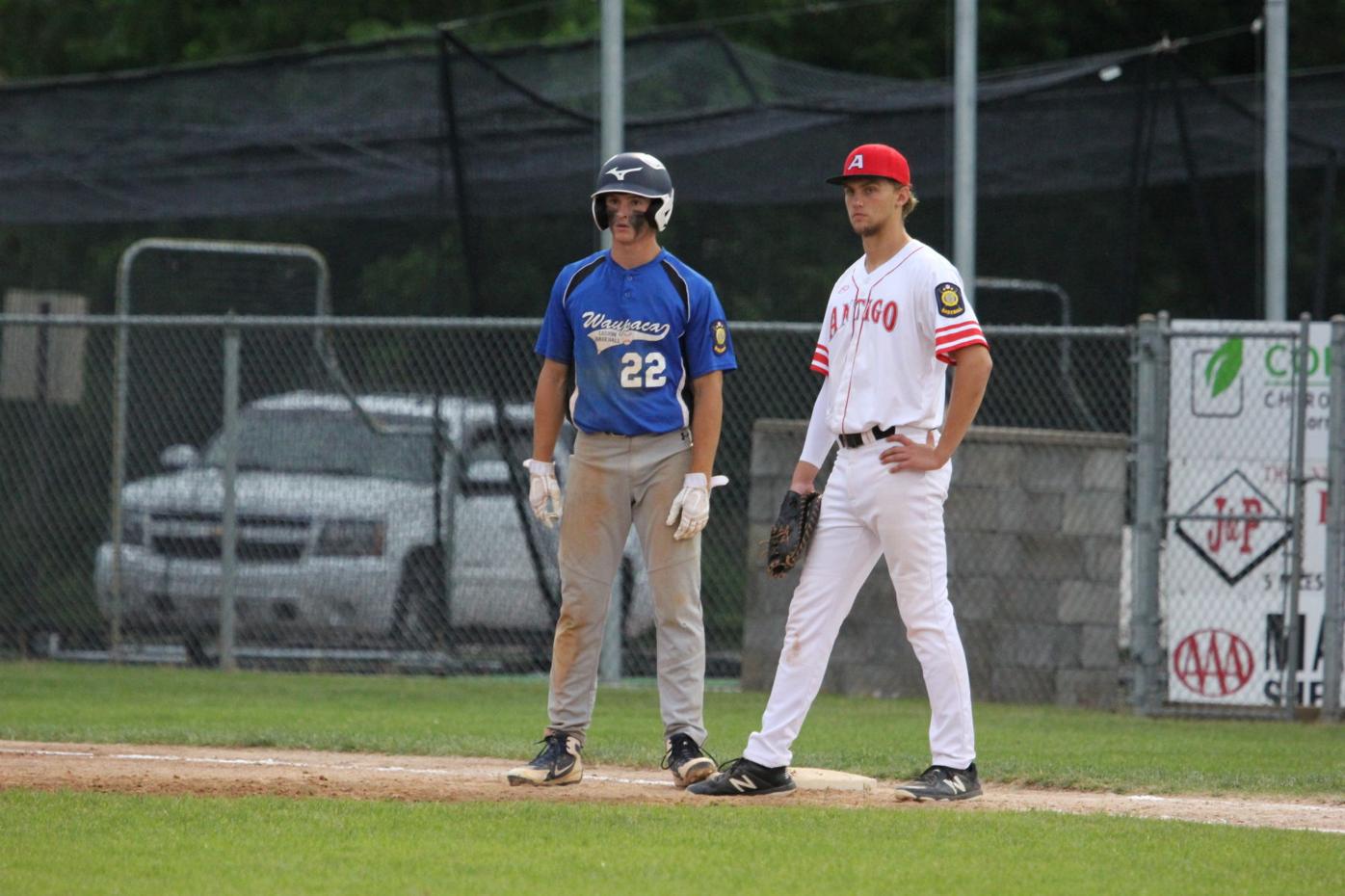 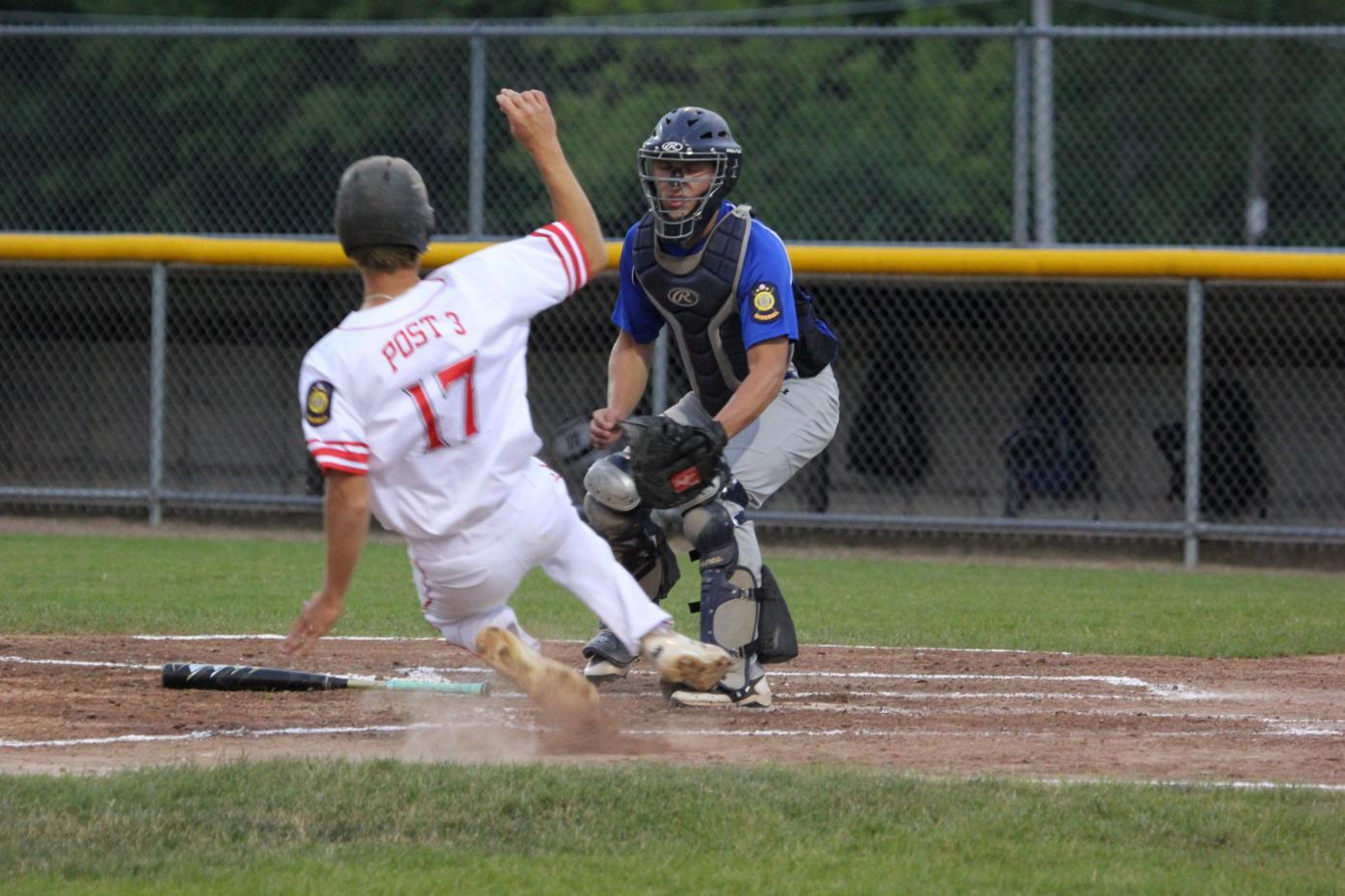 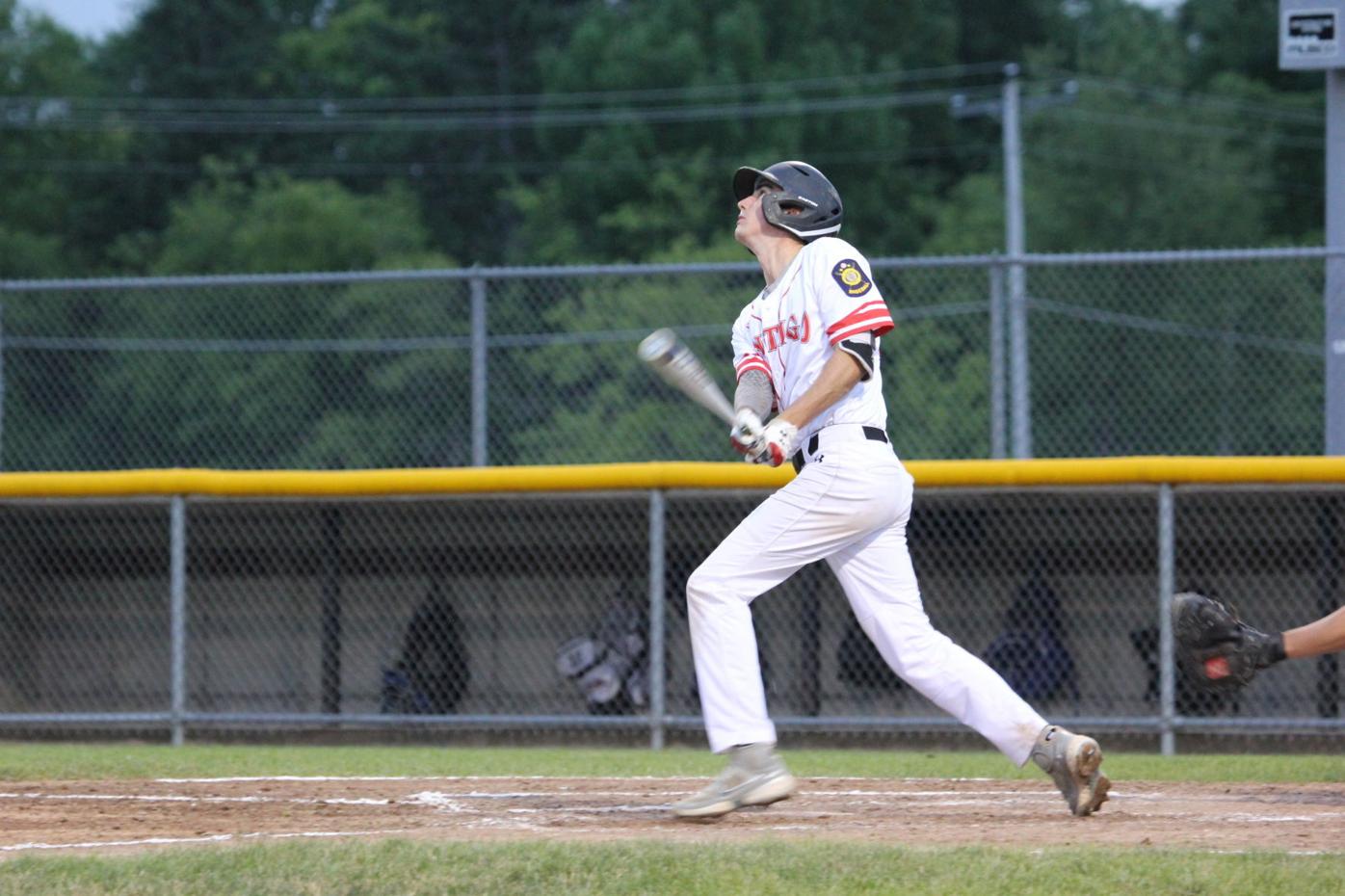 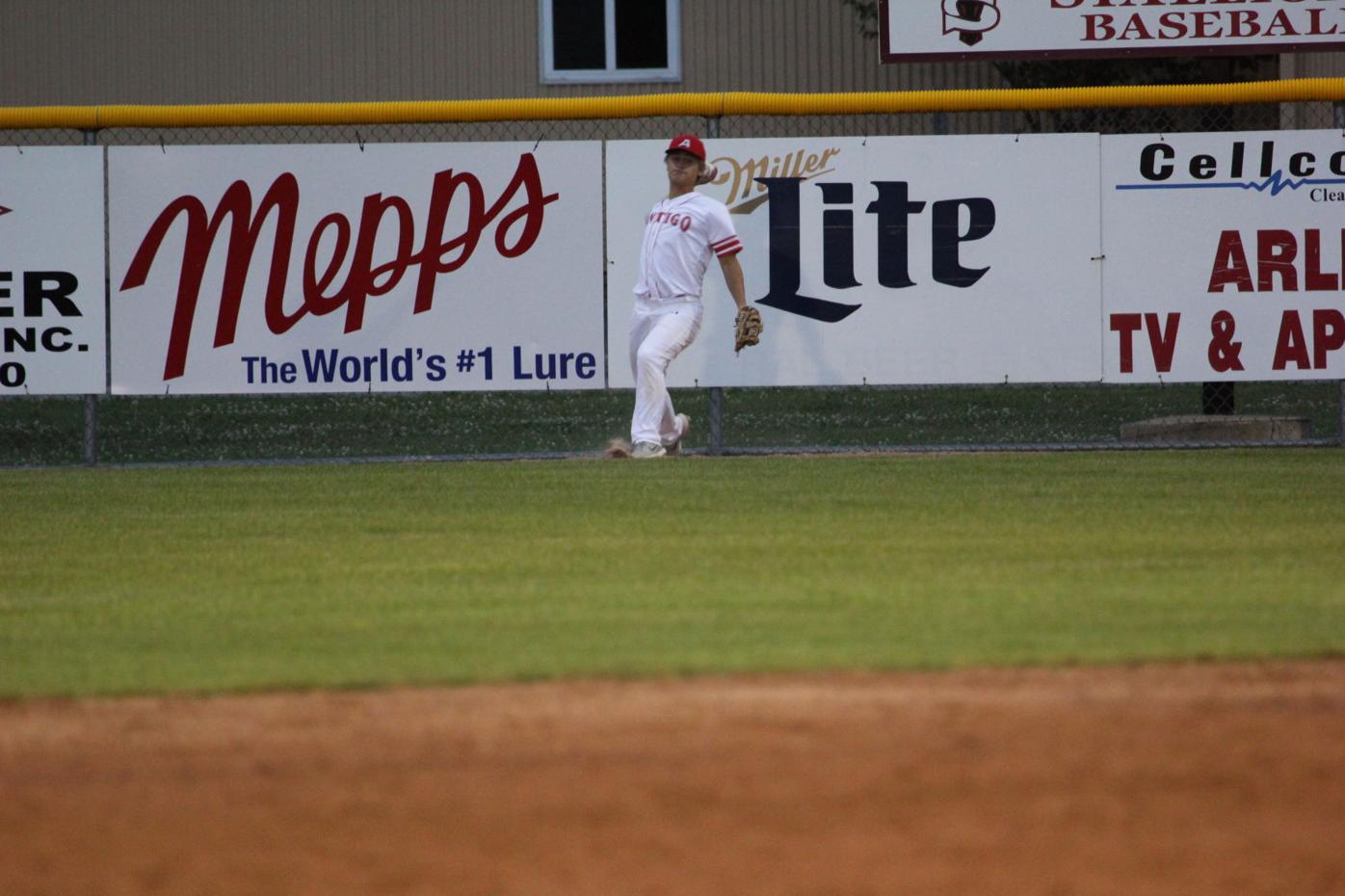 Antigo’s Eli Fleischman slides safely home after a Logan Thomae double in the third inning Wednesday night at Kretz Park, while Waupaca catcher Tyler Rogney looks for the ball. Both Fleischman and Thomae had two hits in a 5-4 American Legion win for Antigo.

The Antigo American Legion baseball team closed out its regular season Wednesday, with an exciting 5-4 walk off win over Waupaca at Kretz Park.

The victory gives Antigo a 9-8 regular season record, traversing through a tough schedule as it prepares for Class AA regional play this weekend, before hosting the AA State Tournament beginning next Friday, July 30.

Post 3 was able to pull out the win, despite blowing a 4-0 sixth inning lead. A key Antigo error on a ball hit by Waupaca’s Luke Schwenn to lead off the frame started things. Dutch Nickel then drew a walk, before Typhoon reliever Will Kubeny was able to get back-to-back ground ball outs.

The second plated Waupaca’s first run, before a walk and hit-by-pitch loaded the bases for shortstop Alex Pankratz, who cleared them with a double, tying things at four apiece.

Kubeny was able to get Vin Nikolai to pop to Cole Kupfer at second base to end the threat.

After Antigo stranded the go ahead run in the bottom of the sixth, Kubeny shut down the Waupaca bats in order in the seventh, setting the stage for an exciting finish. Neil Bretl led off with a walk. Eli Fleischman was hit by a pitch, bringing cleanup hitter Conner Kolz to the plate. Kolz laced a double to the gap, scoring Bretl for the win.

“It was a nice win to close out the regular season and a good tuneup for us heading into the regional playoffs,” head coach Alex Heiny said. “Waupaca is a solid Class AA team. Unfortunately we allowed them to tie things up in the sixth inning, but we did a nice job to overcome the situation and get the walk-off win.”

Kubeny was the winner in relief after a good showing by starter Luke Pecore, who ended with a no-decision. The duo allowed just two Waupaca base hits on the night.

He did struggle a bit with walks, giving seven hitters free passes, but was able to work his way out of trouble each time.

“Luke had a good outing on the mound despite allowing too many walks, he still managed to give us five shutout innings,” Heiny explained. “Will showed a lot of poise responding with a scoreless seventh inning after the four runs scored in the sixth.”

Antigo opened the scoring in the first, courtesy of an RBI single from Pecore and pushed the gap to 2-0 in the third, when Logan Thomae doubled home Fleischman, who led off the frame with a single.

A pair of runs came across in the fifth, with Fleischman delivering an RBI double and coming home on a single from Thomae.

Bretl, Fleischman and Thomae all had two hits to lead the Typhoon, with Bretl scoring three times. Fleischman was hit by a pitch twice, reaching base in all four of his at-bats. Kolz, Pecore and Kupfer all had one hit each.

Braeden Ryan and Pankratz recorded the two hits for Waupaca, with Ryan reaching base in all four of his chances.

After an up-and-down season, the Typhoon now looks forward to what its hopes is a successful postseason run.

“This team is certainly battled tested heading into regionals,” Heiny added. “We’ve played a bunch of close games in what I’ll go out on a limb and say was the toughest schedule any Class AA team had.”

First up is a date with the regional host Rhinelander, beginning at 8 p.m. Friday night.

Minocqua and Medford will meet prior at 5:30 p.m. Merrill is the fifth team in the regional and receives a first round bye.

Even if the Typhoon comes up short in regional play, they are still State-bound, receiving an automatic bid as the tourney host.

Make no mistake however, a regional championship is the goal. Should Antigo take first, the second place team will receive the State bid from Region 2.

It’s a good field, with the high school versions of each team scoring wins over Heiny’s Red Robin team earlier this year.

“It certainly won’t be easy in regionals as they are all teams we’ve lost to this spring,” Heiny said. “Rhinelander and Medford both made it to sectional championship games, Merrill played in the Valley Legion League with us and Minocqua has a couple of pitcher that can shutdown the opposition. However, if we play like we’re capable of, I’m confident we have what it takes to win the regional.”