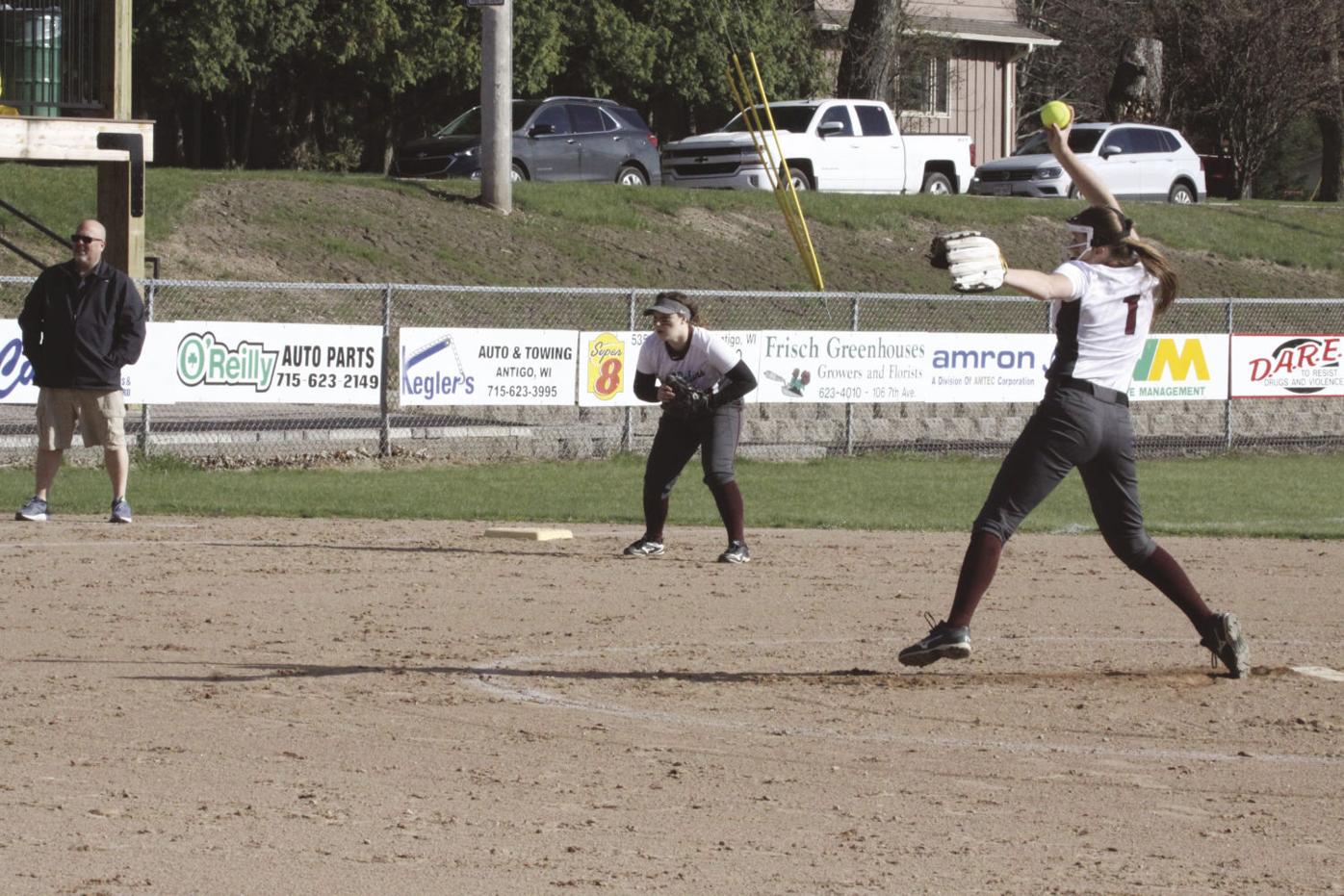 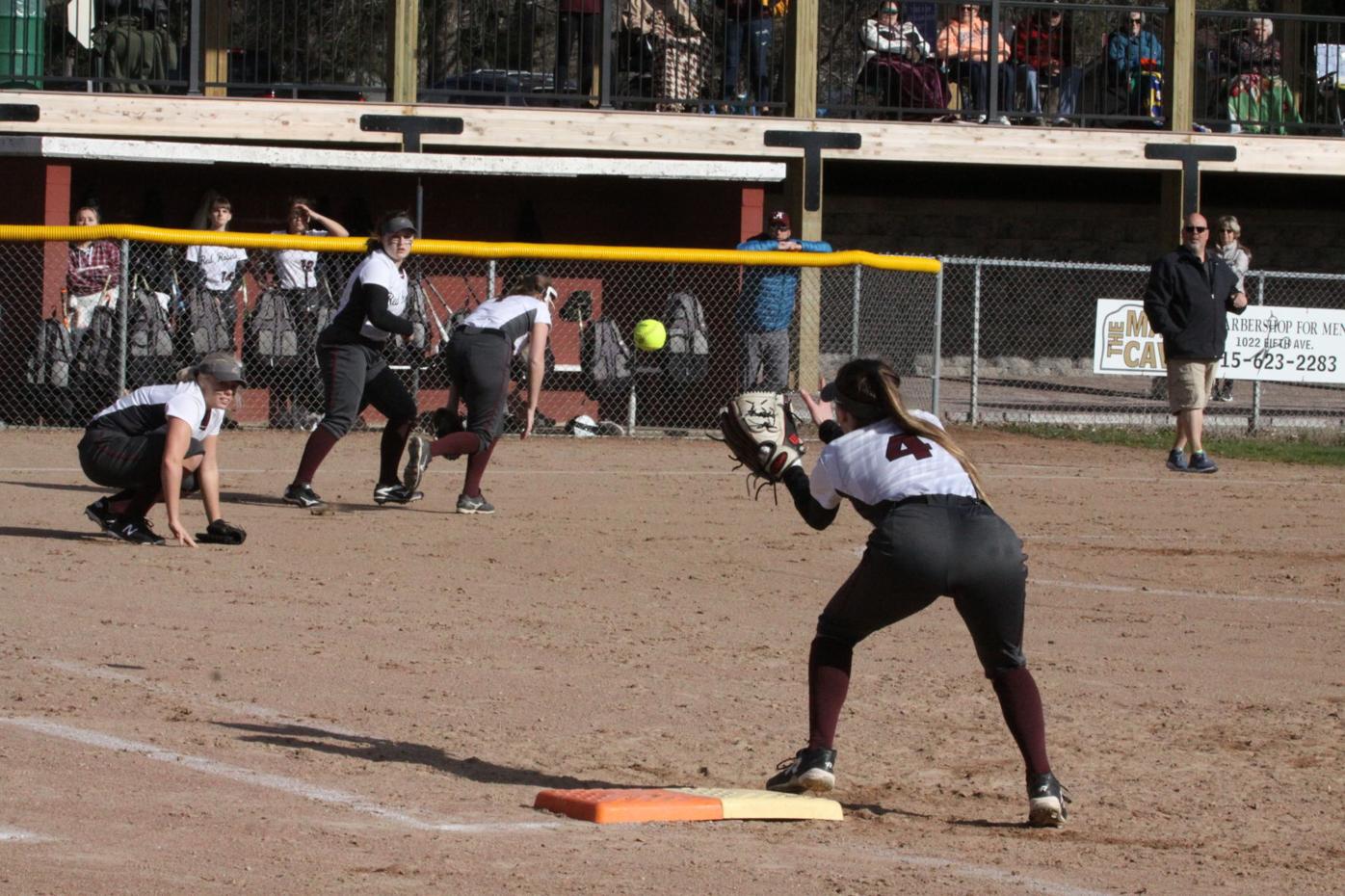 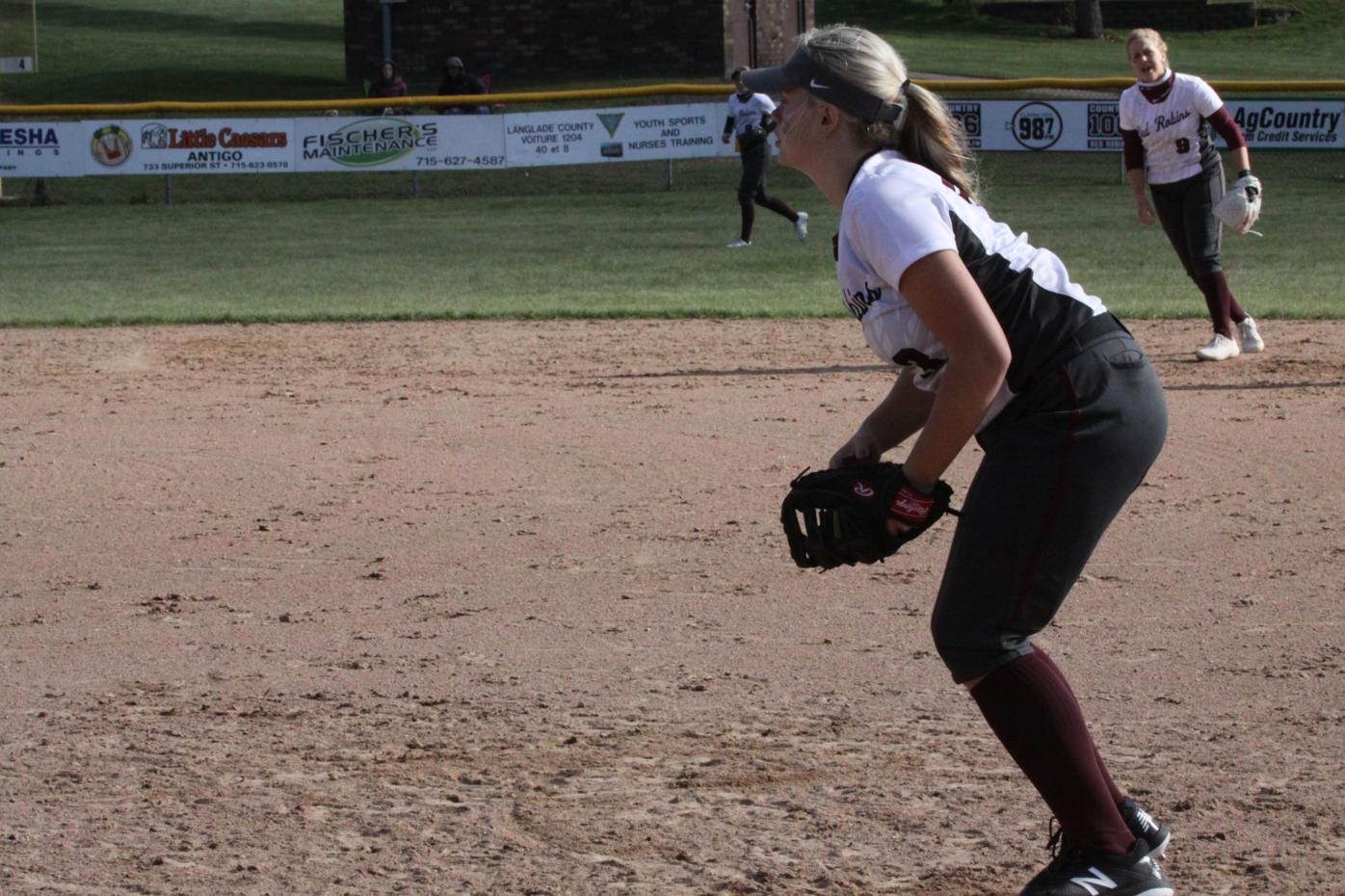 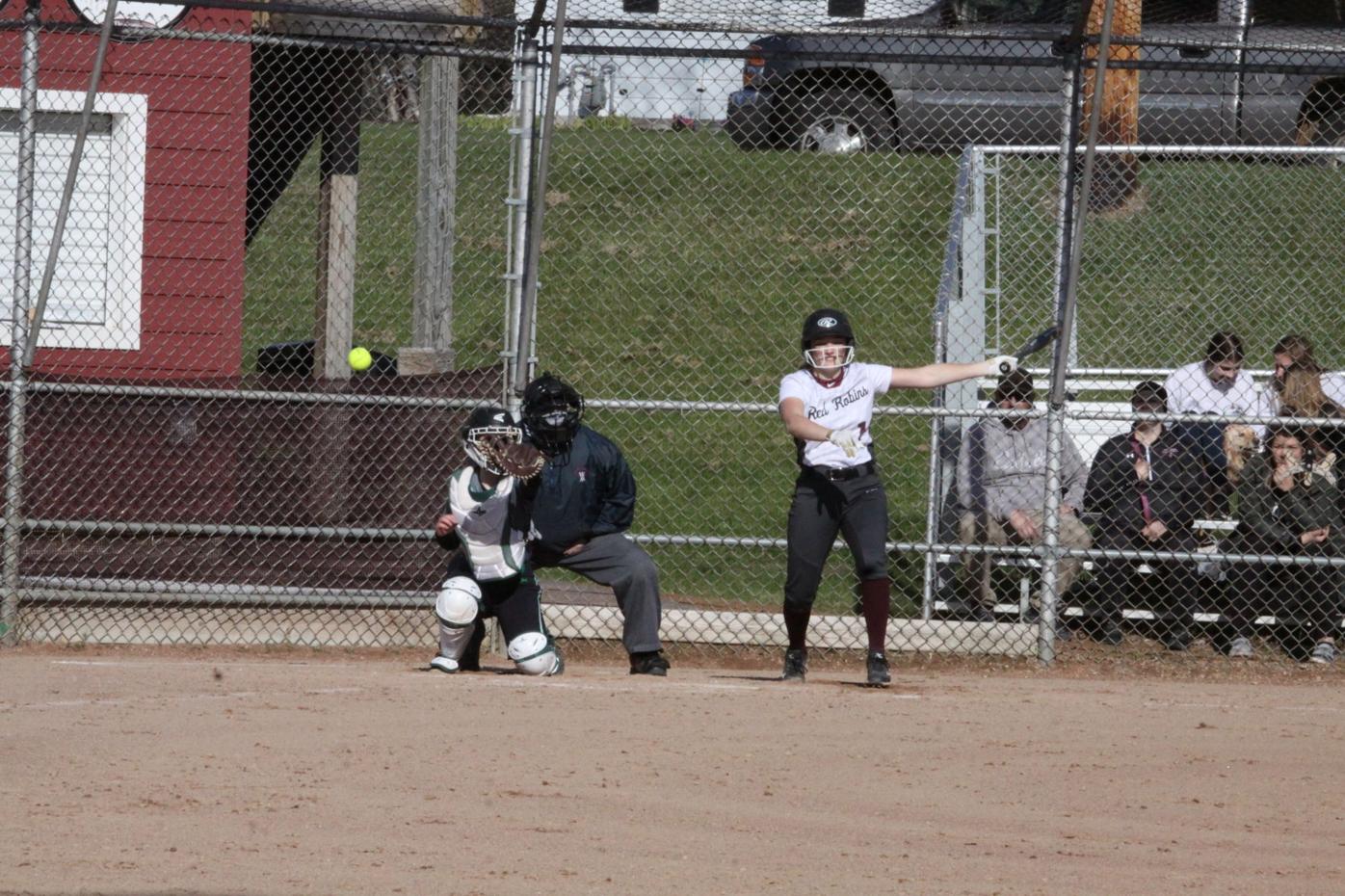 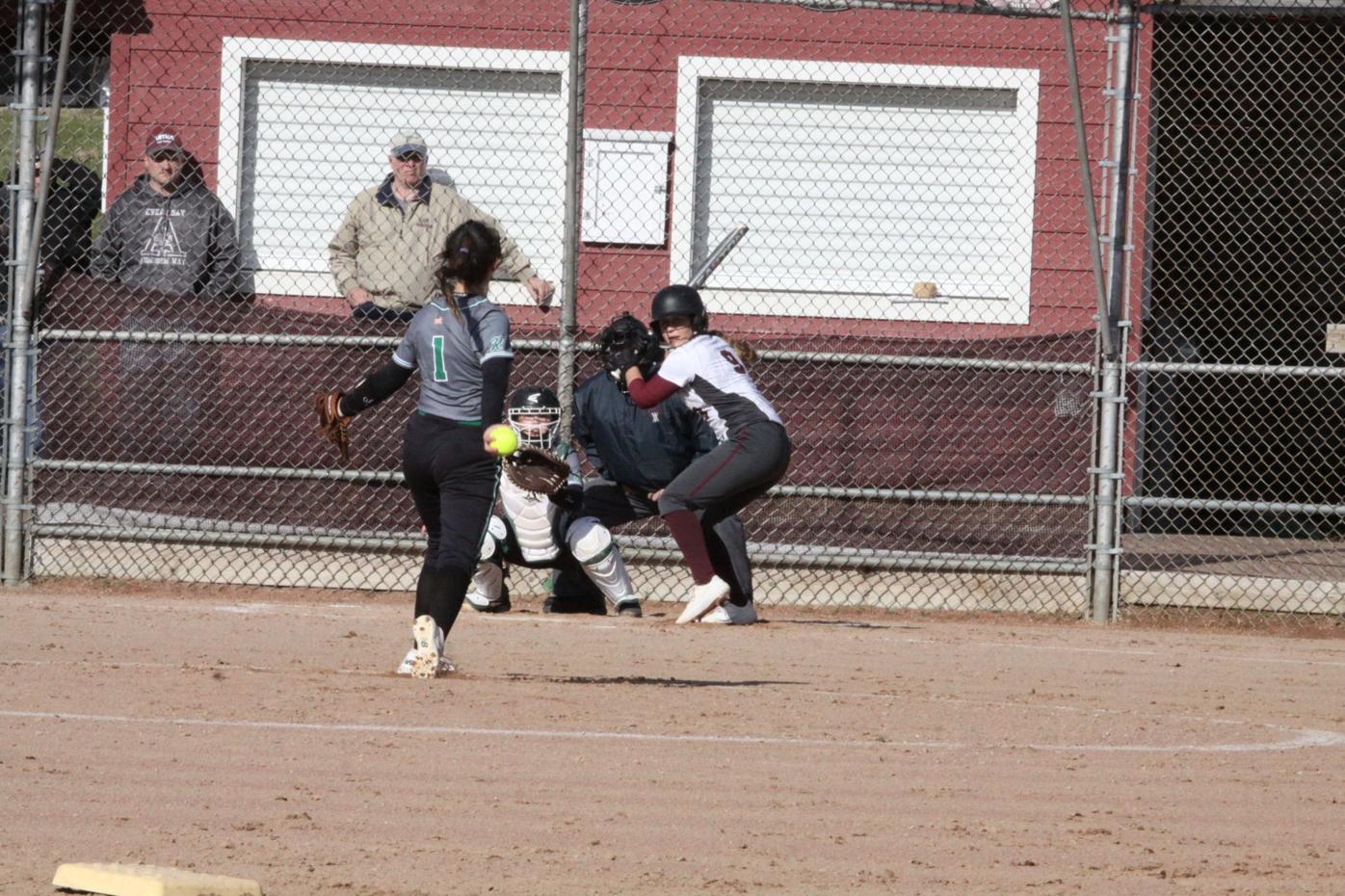 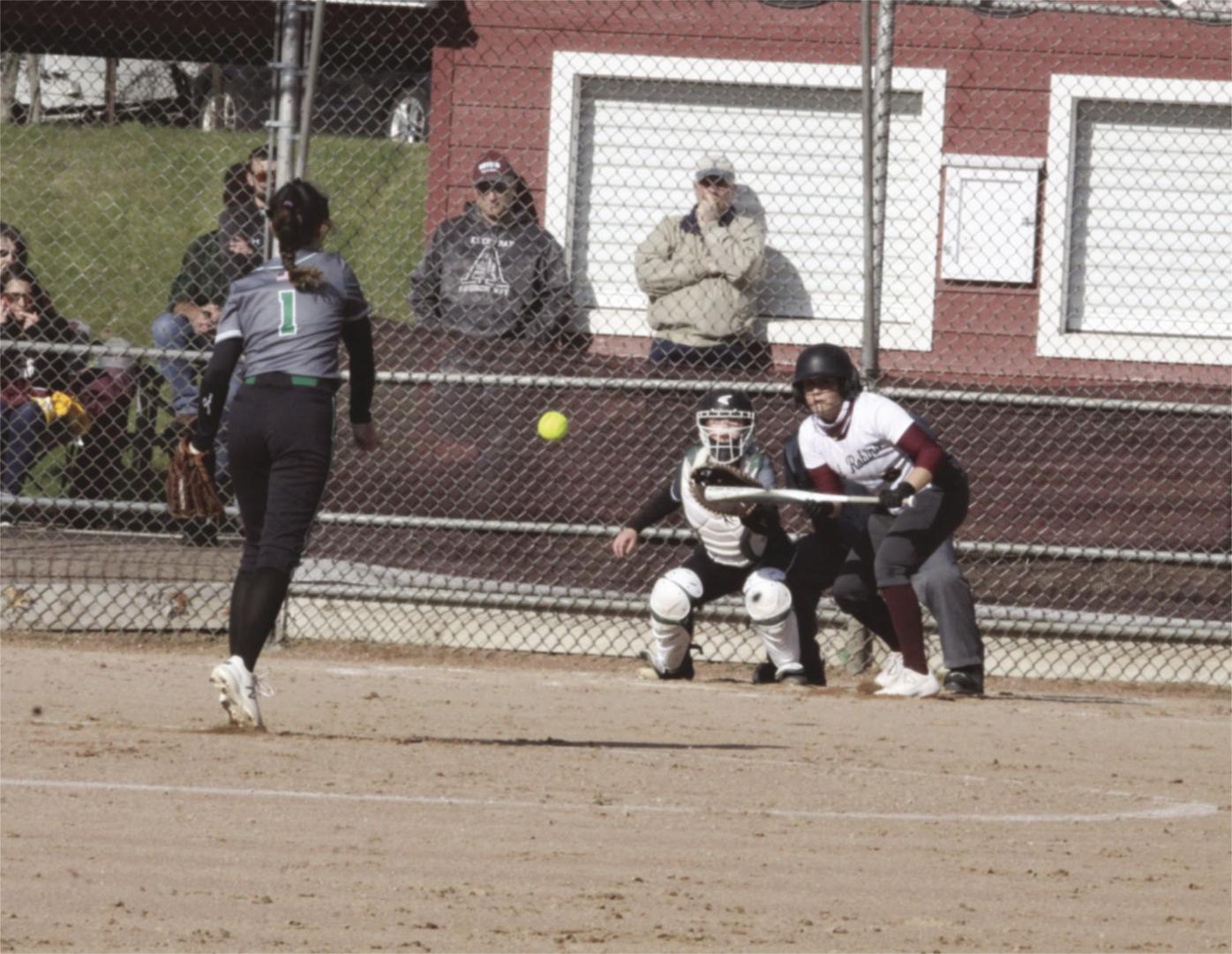 Small ball got it done for the Antigo Red Robins softball team on Thursday, in a 2-1 win over Rhinelander at Al Remington Field. Here, Lily Weix attempts to lay down a sacrifice bunt against Rhinelander pitcher Addi DeMeyer.

Small ball got it done for the Antigo Red Robins softball team on Thursday, in a 2-1 win over Rhinelander at Al Remington Field. Here, Lily Weix attempts to lay down a sacrifice bunt against Rhinelander pitcher Addi DeMeyer.

The Antigo Red Robins softball team has bounced back nicely from its season opening loss to Merrill.

The Lady Robins edged Rhinelander in an exciting 2-1 game at Al Remington Field Thursday, before taking it to Wausau West on the road in an 8-2 final on Friday.

Tied at one in the bottom of the seventh, the Robins plated the winning run when a failed squeeze play turned into a Rhinelander throwing error, with Ellie Preboski coming home to end things in the 2-1 final.

“Addi DeMeyer threw well for Rhinelander,” head coach Sandi Robrecht said. “We struggled to put the ball in play so we tried a little small ball. We manufactured a win, but it was tough.”

Presboski reached on a walk to start the frame, moved over on a Swartz sacrifice, who also reached on a Rhinelander throwing error. A Lily Weix walk loaded the bases with one out for Greta Parsons, who struck out.

Next up was Abi Noskowiak, who laid down the bunt as Antigo attempted the squeeze play. Preboski got hung up between third and home, but Rhinelander catcher Maddie Roesser’s throw sailed into left field, allowing the winning run to score.

It gave Swartz a well-deserved win on the mound. Swartz pitched all seven frames, allowing one unearned run on seven hits. She walked two and struck out nine, pitching herself out of trouble on several occasions.

Swartz meanwhile, also helped herself at the plate with one of the Robins’ two hits on the day. Faith Bussiere had the other.

DeMeyer, Abigail Bixby and Annyka Johnson all had two hits each to lead the Hodags.

The first two runs of the game were also aided by miscues in the field. Rhinelander scored in the top of the third on throwing error after DeMeyer singled to start things.

The Robins answered back in the bottom of the third, as Alonna Weix walked to open the inning, stole second and third, before coming around to score on an error.

“Some of our struggles are early season issues,” Robrecht explained. “We have strong upper classmen and motivated girls and we will get them on track.”

Nonetheless, the Robins Great Northern Conference opener was a win.

“A win is a solid way to start the conference season,” Robrecht noted.

Friday, the Robins ventured to West High in Wausau for a non-conference matchup with the Warriors from the Wisconsin Valley Conference.

Again it was Swartz tossing a solid game on the hill. The Robins’ hurler went all seven innings, allowing two runs on just three West base hits in an 8-2 Antigo win. She walked three and struck out eight.

Swartz had a nice day at the plate as well, as did Lily Weix. Both had two hits, with Weix driving in three runs, including two on a first inning double, as the Robins scored three times in the opening frame.

West answered back with two runs in the bottom of the first and it remained that way until the fifth, when Antigo opened things up with three runs of their own.

Bussiere led off the frame with a single and then Antigo played small ball again, with both Natalie Dewey and Preboski reaching on sacrifice bunts. Preboski drove in a run with hers, while Swartz followed with an RBI single and Lily Weix’s sacrifice fly made it a 6-2 game.

Alonna Weix added a run-scoring single in the sixth, with Bussiere driving in another with a groundout.

Antigo had eight hits in the contest, with Makayla Beck and Greta Parsons also adding singles.

The Robins improved to 2-1 overall with the wins, while West dropped to 0-3.

Next for Antigo is a non-conference home date with Ashland on Tuesday, beginning at 4:30 p.m.