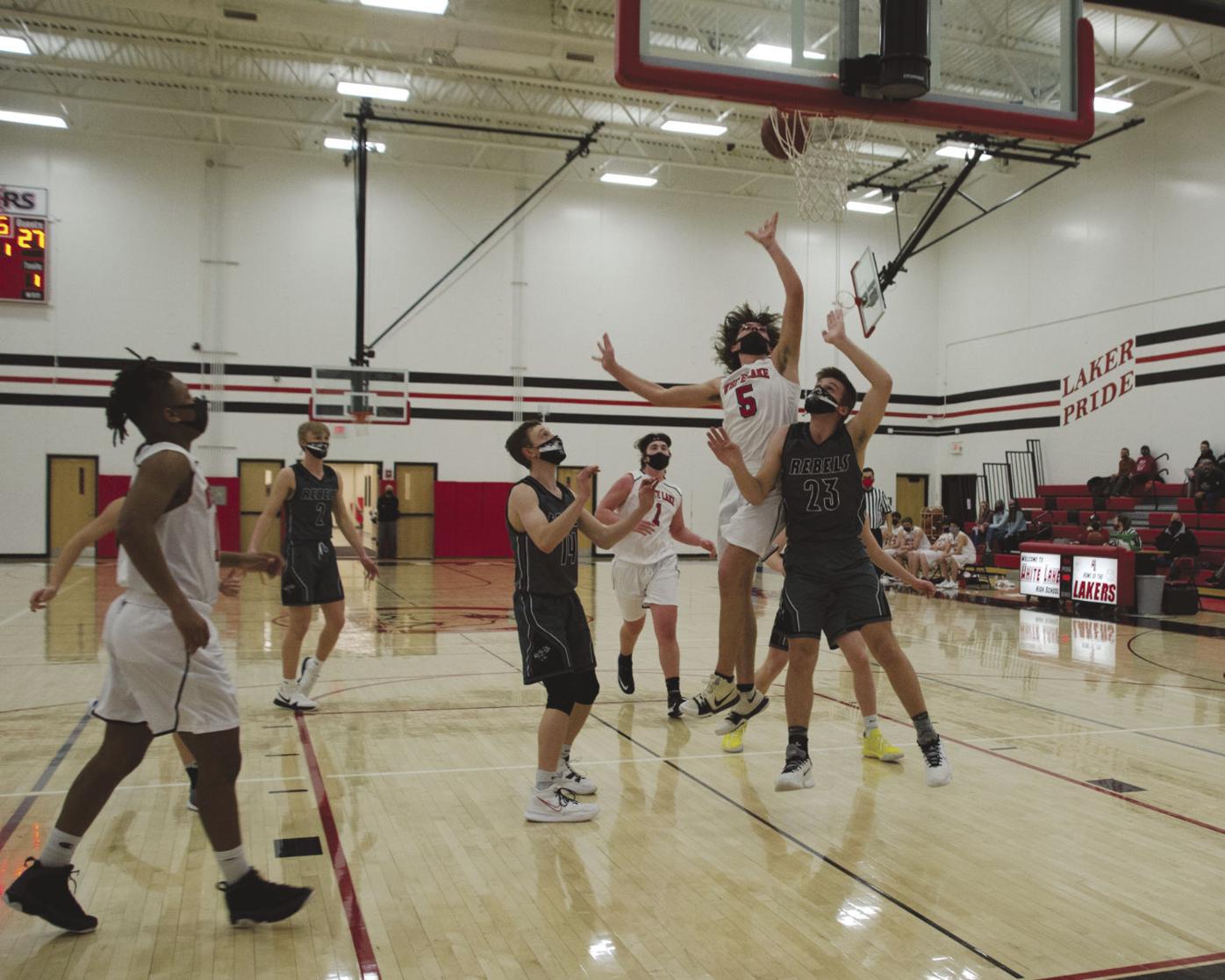 White Lake’s Braden Fredrick (5) goes up for a tip-in during Tuesday’s home game with Laona-Wabeno. Fredrick ended the game with 33 points, coming on the heels of a 26-point performance Monday. 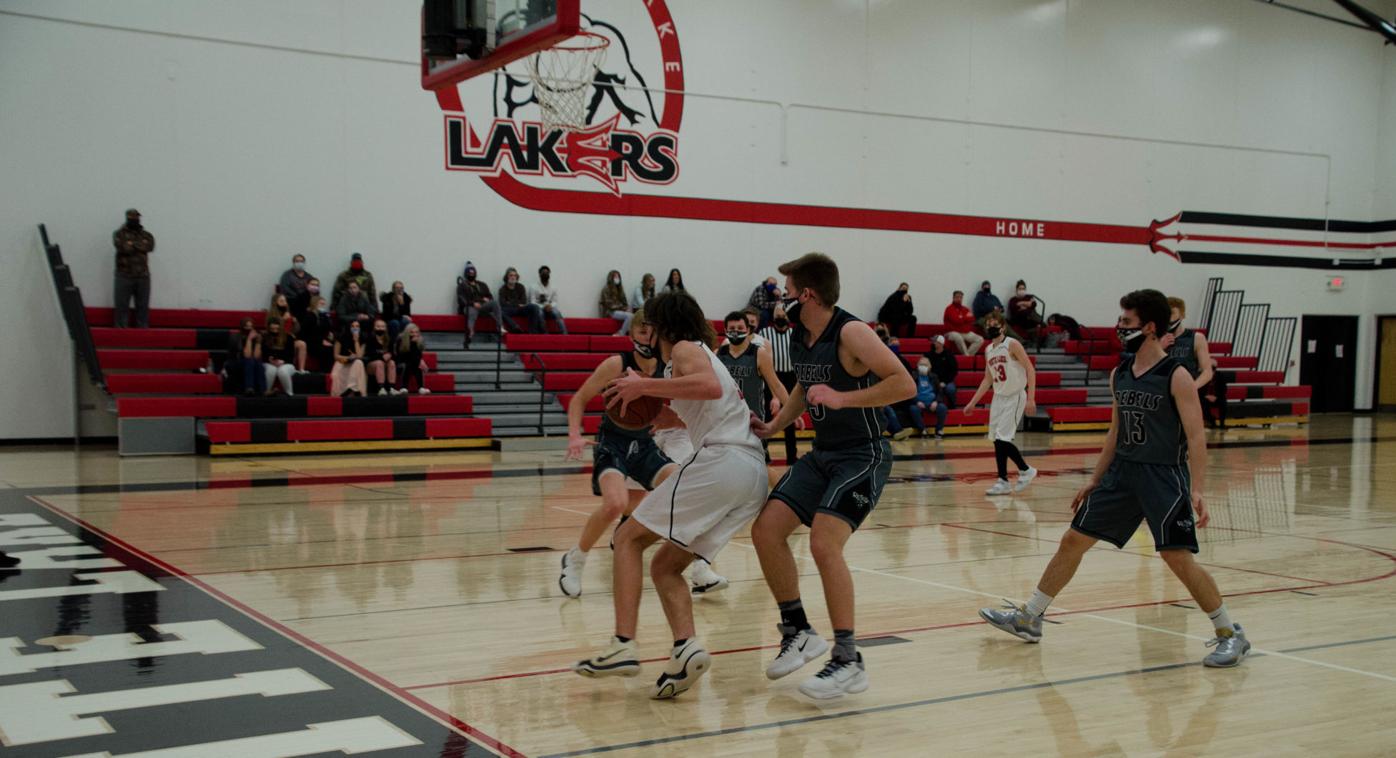 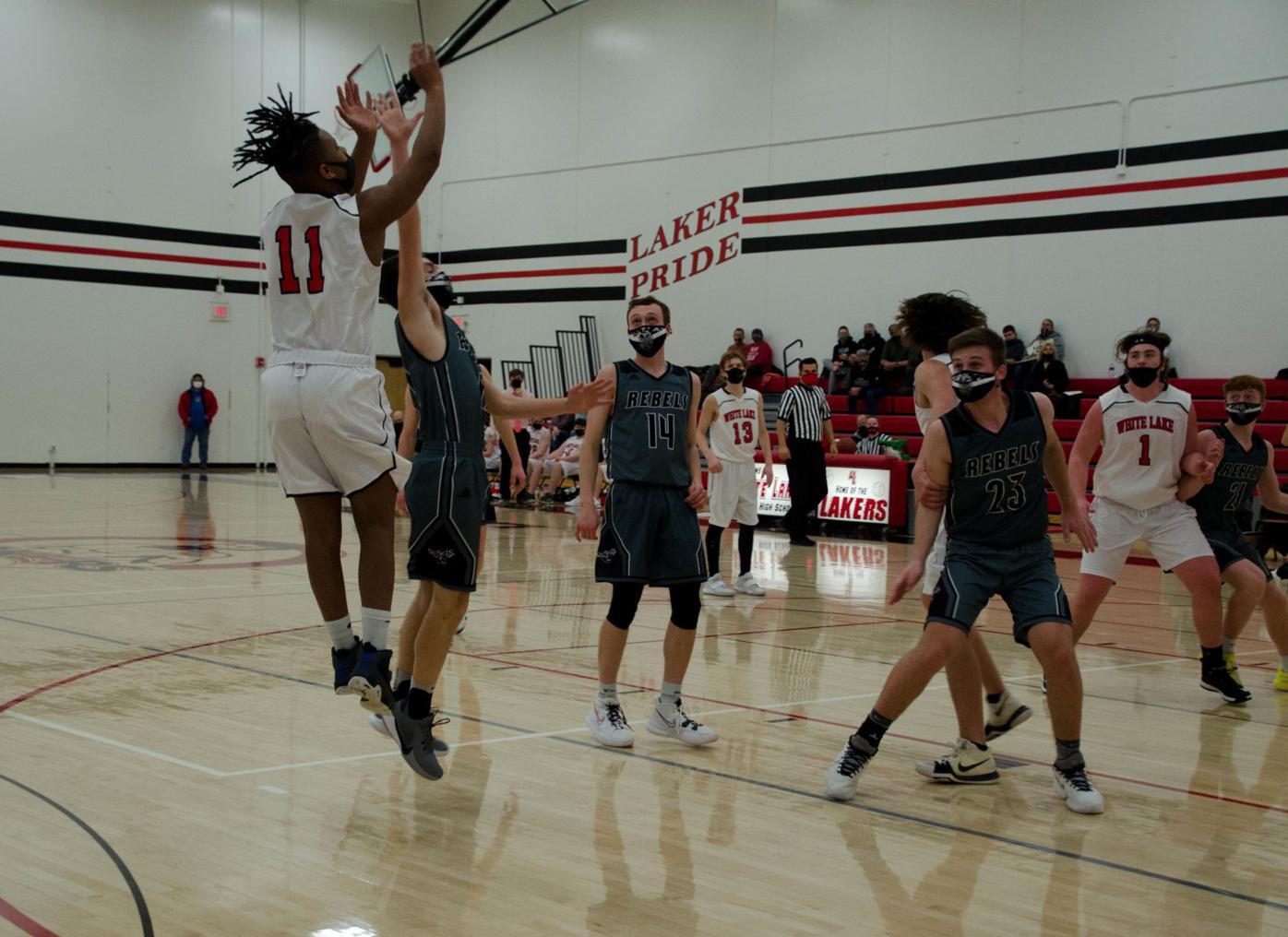 White Lake’s Braden Fredrick (5) goes up for a tip-in during Tuesday’s home game with Laona-Wabeno. Fredrick ended the game with 33 points, coming on the heels of a 26-point performance Monday.

Monday’s contest at Marion saw the host Mustangs jump out of the gates quickly, taking a 34-21 lead to the half, while the Lakers were never able to seriously challenge after that.

“We fell to Marion by more than we would like to see,” coach Chris Schewe said. “The boys came out a little flat on defense which led to Marion going on a run right away. But once we settled in the game got a lot better, we continue to improve as a team.”

White Lake’s Braden Fredrick did his best to keep his squad in the game, scoring a game-high 26 points, as he posted 13 in each half.

Marion, a member of the Central Wisconsin North Conference, improved to 6-3 with the 70-45 win.

Tuesday’s return to Northern Lakes Conference play saw a much better start by the Lakers, who grabbed an early lead before a Laona-Wabeno run gave the Rebels an advantage they would not relinquish.

“Losing the lead did not discourage the boys,” Schewe noted. “They continued to battle with the conference leaders and played a heck of a game.”

Fredrick continued his recent scoring onslaught with 33 points, while adding 12 rebounds for a double-double. His stat line also included six steals, six blocks and five assists, a monster night any way you measure it.

“Fredrick played a great game offensively and defensively,” Schewe said. “He really did everything for us.”

Gage Steckbauer added nine points and played well on defense before a second half injury sent him to the bench.

“Jarmuz plays great down low and was a huge presence for us on defense,” Schewe explained. “He may not score a ton of points, but he will do everything and anything you ask him to do.

Schewe also pointed to the play on defense of Chism, Blake Lambert and Carter Holbrook who didn’t allow Laona-Wabeno many easy shot opportunities.

Despite the 89-51 loss, there were even more bright spots, including improved play in the turnover department.

“Turnovers continue to dwindle and the boys are starting to see the open man more often now,” Schewe added. “It’s great to see how much better the boys continue to get, even down 38 they didn’t quit and played from horn to horn.”

While the now 0-8 Lakers are still searching for their first win, Laona-Wabeno improved to 8-3 overall, 5-1 in the Northern Lakes, trailing only first place Goodman-Pembine.

Connor Taylor led the Rebels in scoring with 26 points, while Reed Christianson made it a one-two scoring punch with 23 points of his own.