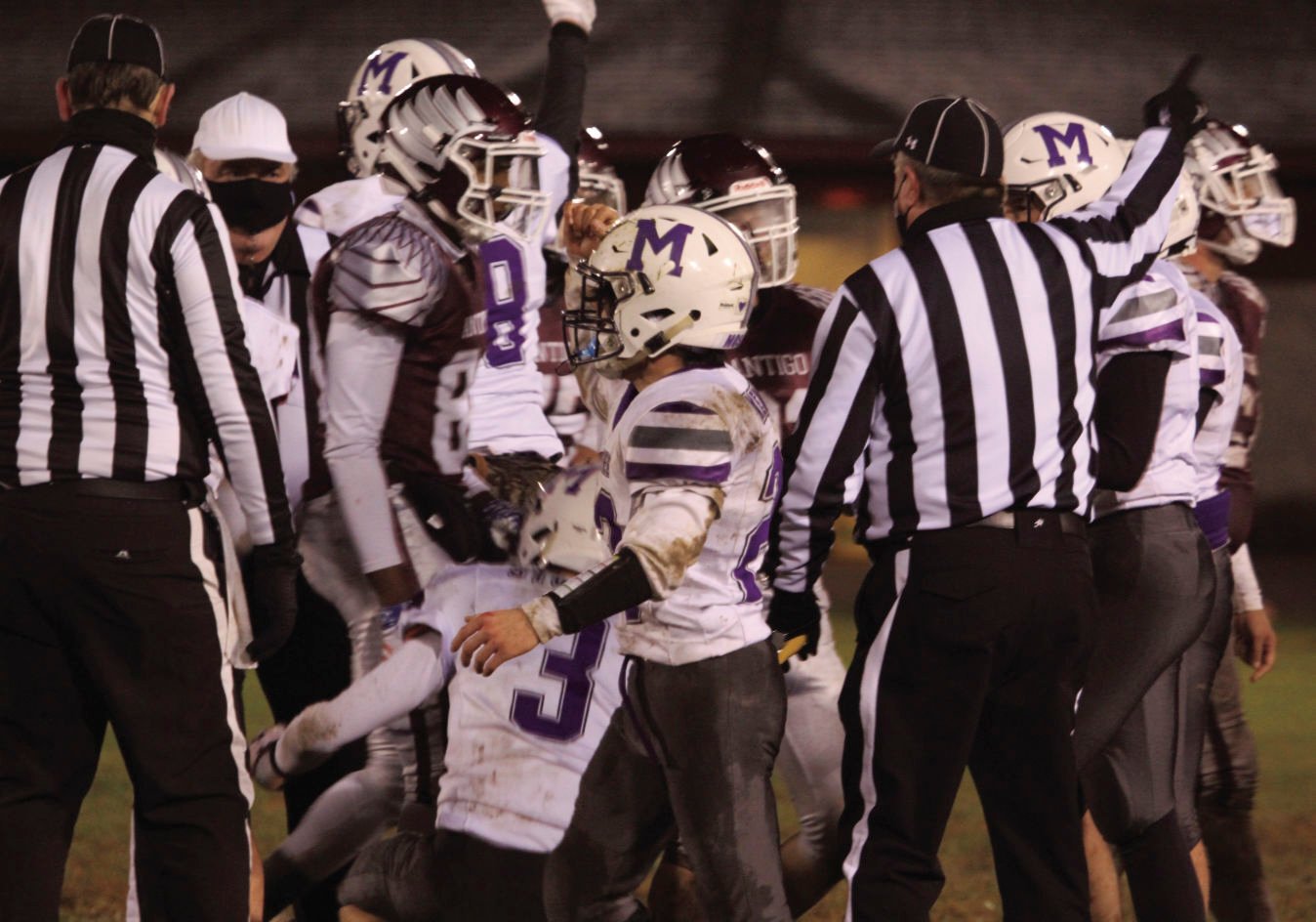 Mosinee’s William Kennedy celebrates as Mosinee recovers a fumble Friday night at Schofield Stadium. It was one of three recoveries for Mosinee in an error-filled 35-6 loss for Antigo. 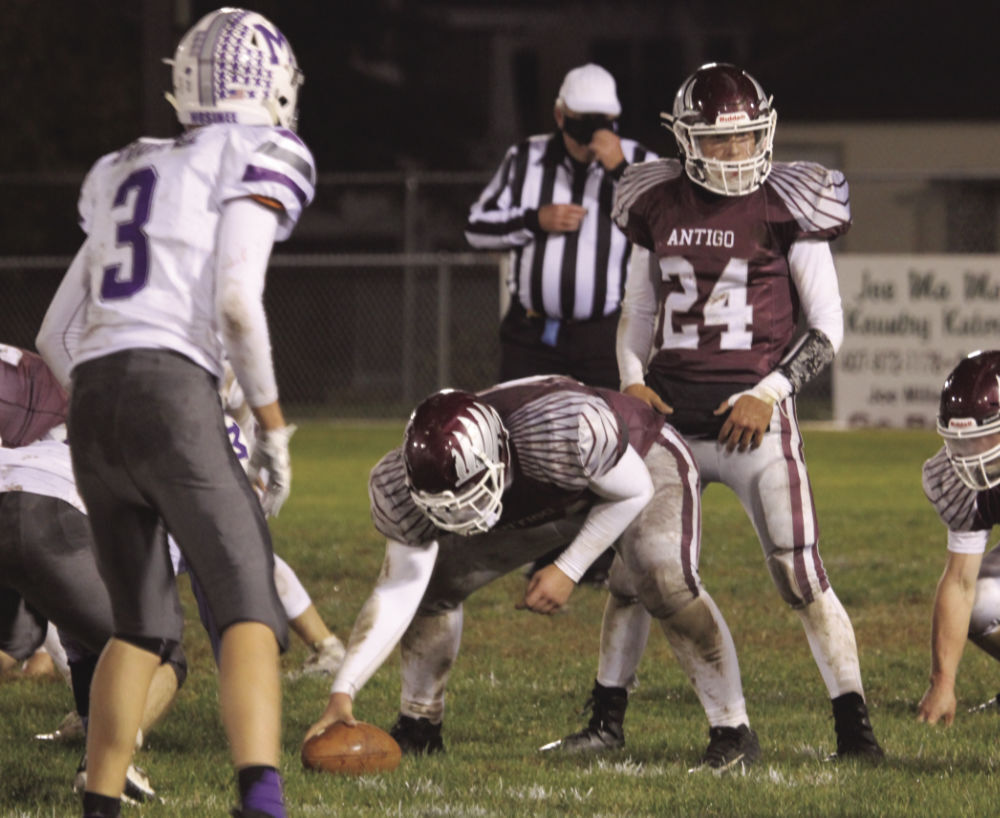 Alex Stank (24) prepares to take the snap during his first varsity start Friday against Mosinee. 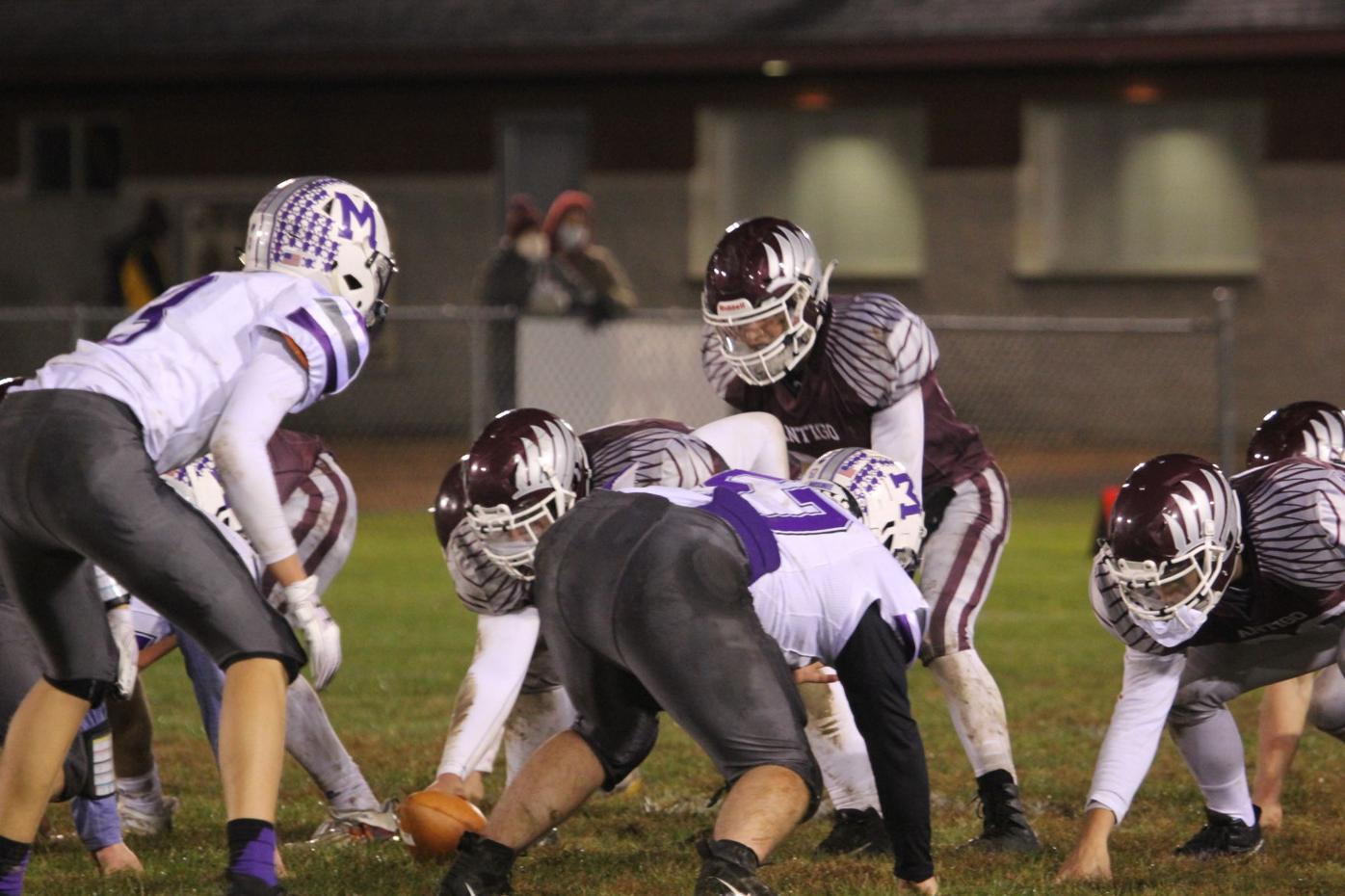 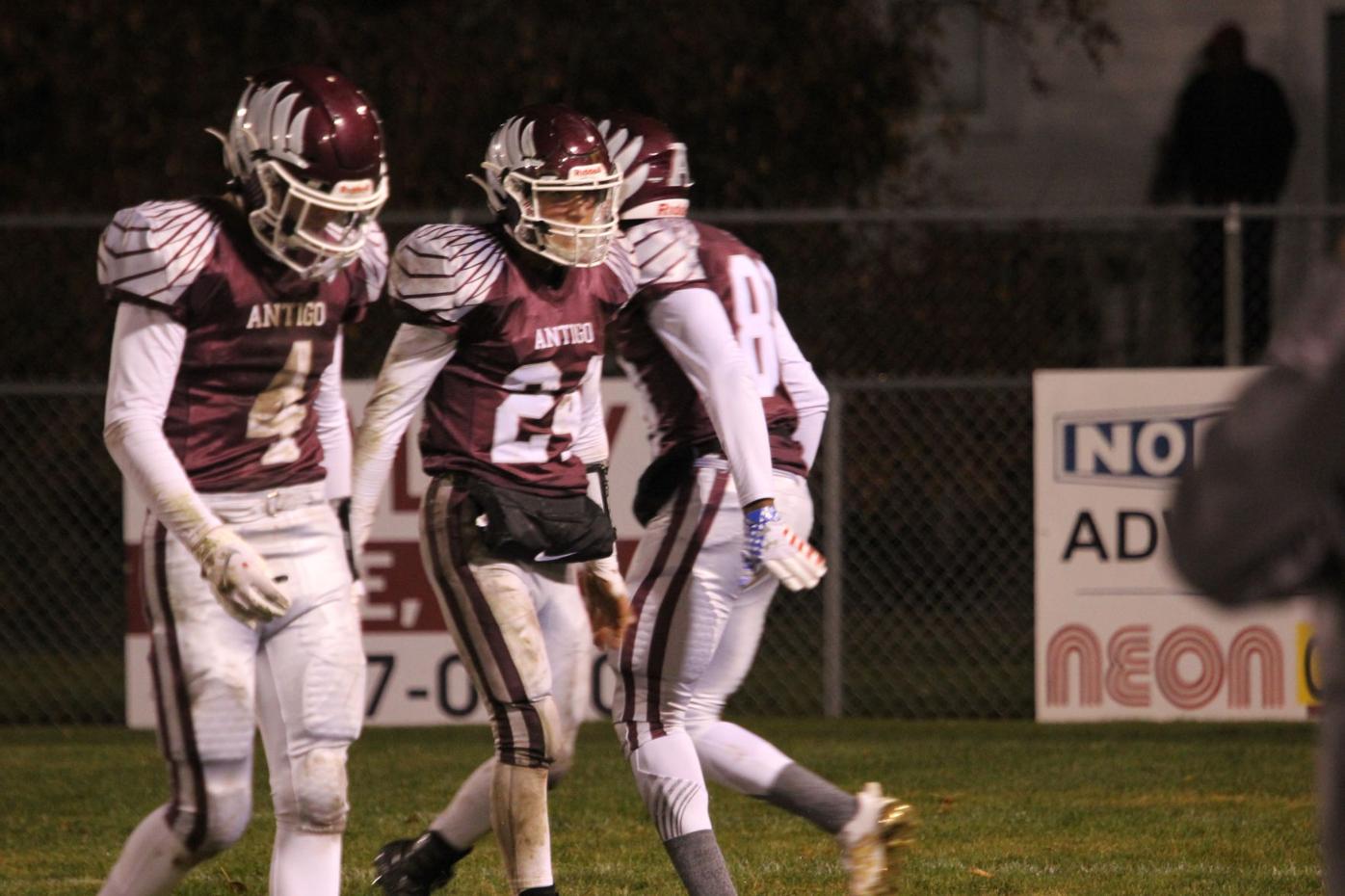 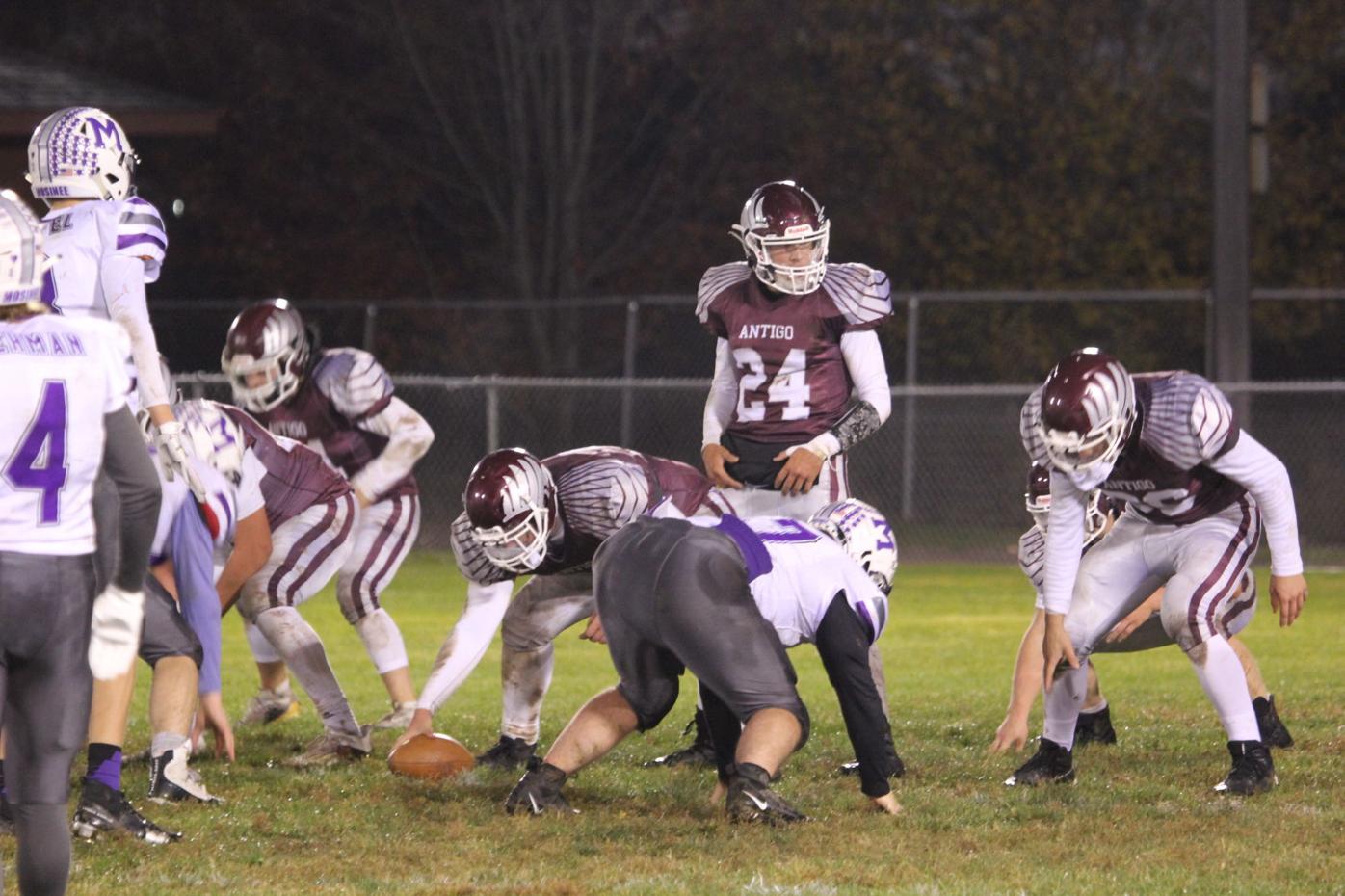 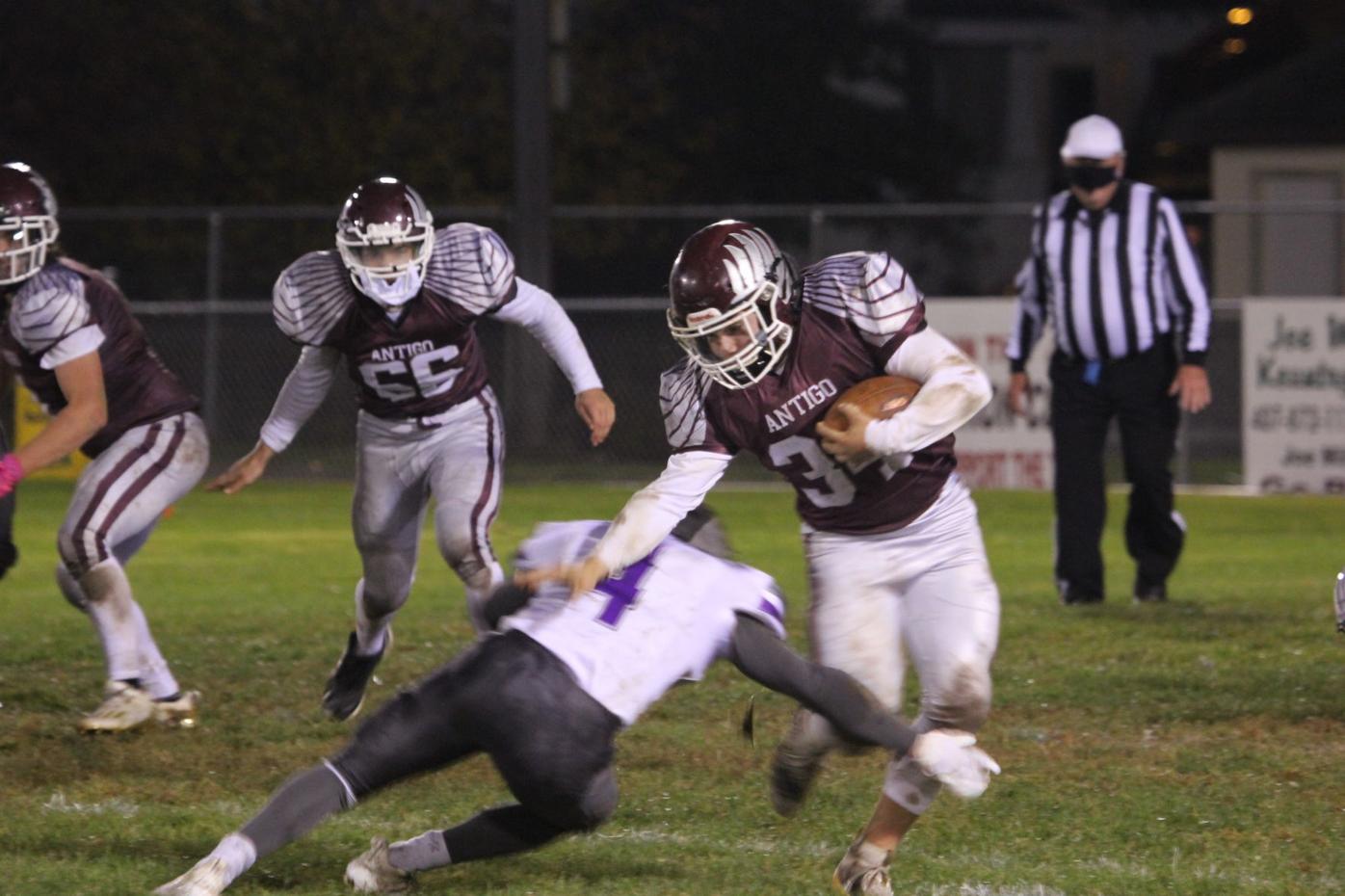 Mosinee’s William Kennedy celebrates as Mosinee recovers a fumble Friday night at Schofield Stadium. It was one of three recoveries for Mosinee in an error-filled 35-6 loss for Antigo.

Alex Stank (24) prepares to take the snap during his first varsity start Friday against Mosinee.

The Antigo Red Robins football team couldn’t carry over the momentum from its exciting come-from-behind overtime win at Hayward a week ago, as Mosinee dominated from start to finish Friday in a 35-6 victory at Schofield Stadium.

Working with a bit of a reshuffled lineup due to various factors, the Robins had a difficult time containing Mosinee’s pass attack. Quarterback Michal Dul returned to the starting lineup after a two-week quarantine and passed for 208 yards on 16 of 27 completions for four touchdowns, while adding another 76 yards on the ground.

Two of those touchdowns went to Cyle Kowalski, while Drayton Lehman hauled in eight passes for 114 yards and a score, both part of a speedy skill set at the receiver position for the Indians.

“They have a lot of speed and are athletic, shifty, agile,” head coach Tom Schofield said. “Once they get on the perimeter they are hard to tackle, we made some plays tonight, some bigs hits, but just couldn’t compare to their speed.”

The Robins also put the ball on the ground five times, losing three of those fumbles in what was the first varsity start for Alex Stank at quarterback. Stank attempted just two passes on the night.

“It was a sloppy game for us, both the field and our play,” Schofield said. “Nothing was clicking, it was hard to put everything together, we weren’t able to execute and it showed on the field. The fumbles hurt, those are hard to overcome.”

First half scoring saw Mosinee punch in a touchdown in both the first and second quarters. Both scores were 13 yard strikes from Dul, the first to Lehman and the second to Kowalski.

A first half interception by Dane Cornelius kept things relatively close, that is until the second half kickoff. Mosinee’s William Kennedy took the second half kick and returned it all the way to the Antigo one yard line. From there he got the honors, taking it in himself as the Indians built a 21-0 advantage.

“Only being down 14-0 at the half I felt we were still in it despite all the mistakes,” Schofield explained. “It’s devastating to come out and give up that kickoff return, we talked about a three-and-out on defense, score and we are right there, but the return was a back breaker and it was downhill from there.”

Dul added his third touchdown pass of the night late in the third, hooking up with Davin Stoffel from two yards out. A missed point after attempt left the score at 27-0 in Mosinee’s favor.

Mosinee then put the game into running clock, at least temporarily, in the fourth. Dul’s fourth td toss was an 11-yarder to Kowalski. A sucessful two-point conversion made it 35-0.

“Dul threw some good balls tonight,” Schofield added. “I was happy we were able to get a couple interceptions off him, Cornelius being able to fly around and make plays is big, he’s coming around as a playmaker, he had a pick last week as well, we need those momentum changes.”

The Robins finally got on the board when Josh Heuss capped off a long drive with a two yard touchdown scamper. The extra point failed, leaving the final at 35-6.

All 171 of Antigo’s yards came on the ground, led by Dakota Matuszewski’s 81 yard effort on 18 carries. Heuss added 58.

With a handful of players missing, one of the more interesting moves was running back Casey Smith moving to the left tackle position.

“Casey playing left tackle was a true team-first, unselfish thing to do,” Schofield said. “He wants what’s best for the team, it’s about having guys step up when others are missing.”

Despite a decent yardage total on the ground, combined yards for the game tilted at 284-171 in Mosinee’s favor.

The loss drops the Robins to 1-3 on the season, while Mosinee moved to 2-2.

Antigo will hit the road next Friday night for the annual “War on 64” and a date with the Merrill Blue Jays at Jay Stadium in Merrill. Merrill is also 1-3 on the season

“We were able to scrimmage Merrill this year and had some success,” Schofield added. “We’re going to try and put together a good game plan, hopefully get our guys back and go over there and bring back a victory.”