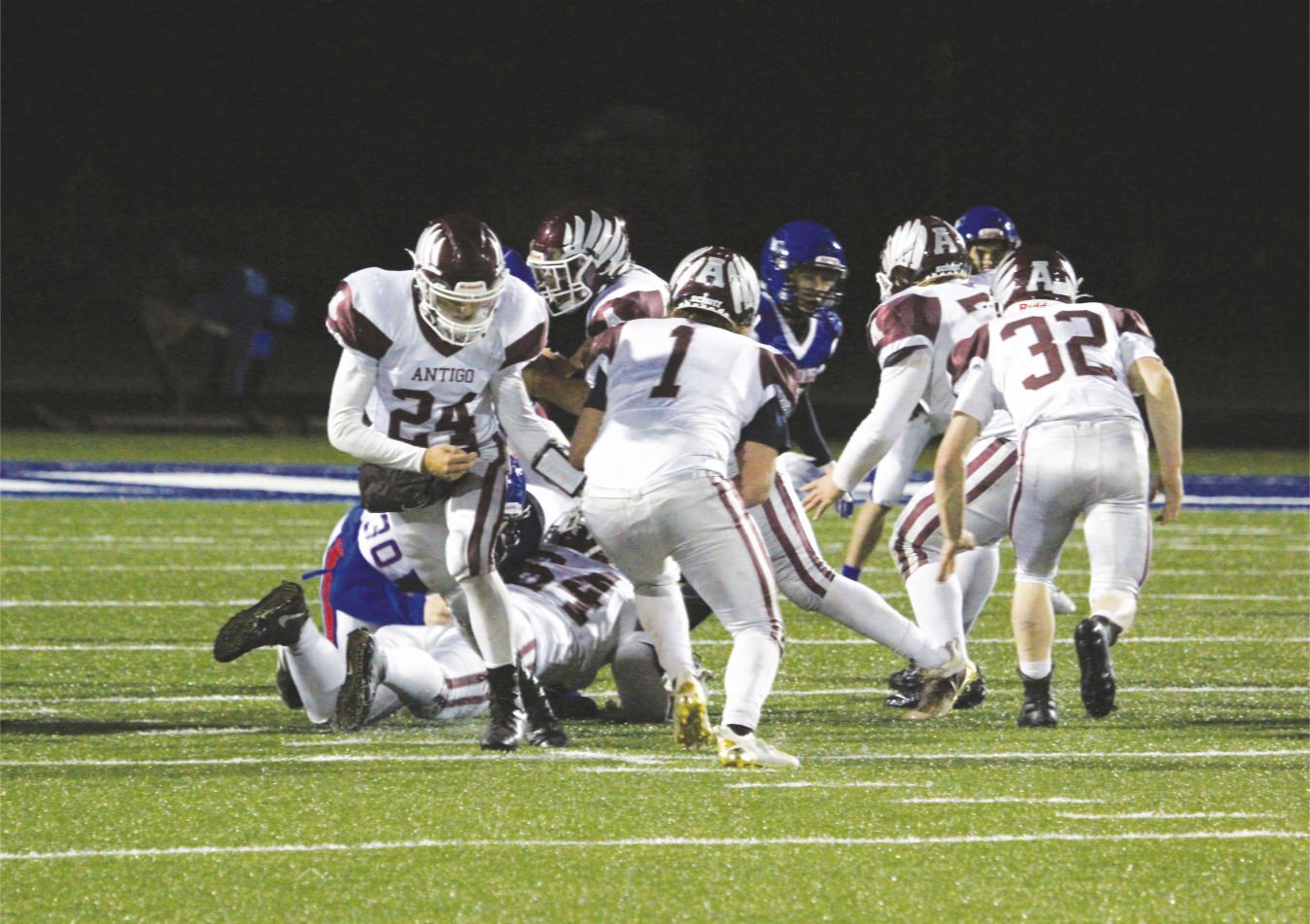 Antigo quarterback Alex Stank (24) hands to Connor Kolz (1) Friday night in Merrill. The Red Robins rallied from a second half deficit to beat the Blue Jays 20-12. 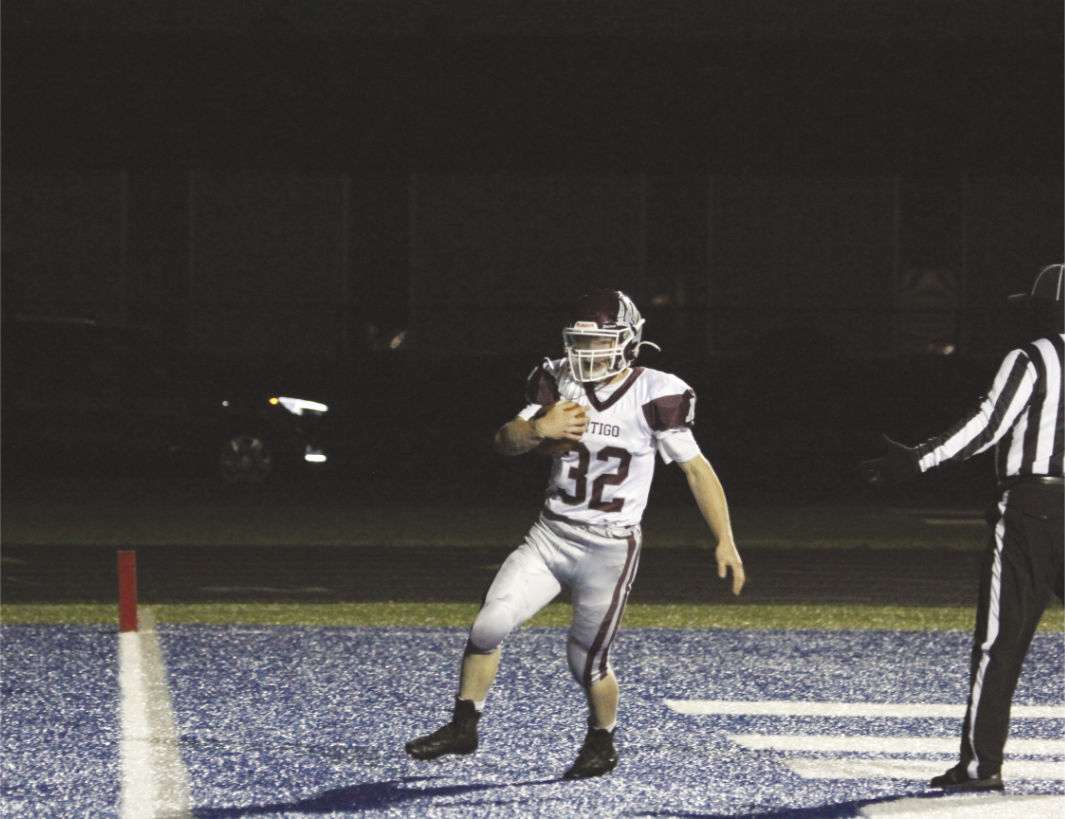 Josh Heuss finds the end zone for Antigo's first touchdown of the night, coming in the second quarter of a 20-12 win at Merrill.

Antigo quarterback Alex Stank (24) hands to Connor Kolz (1) Friday night in Merrill. The Red Robins rallied from a second half deficit to beat the Blue Jays 20-12.

Josh Heuss finds the end zone for Antigo's first touchdown of the night, coming in the second quarter of a 20-12 win at Merrill.

The “War on 64” was just that on Friday night, as the Antigo Red Robins football team rallied from a second half deficit to defeat the Merrill Blue Jays 20-12 in overtime.

The contest was the third overtime game for the Robins this season. Antigo fell to Rhinelander 21-18 in week one, before beating Hayward 20-14 on Oct. 9.

Trailing 12-6, Antigo used an 88-yard second half touchdown drive to force overtime on the road, where Josh Heuss’ 24 yard touchdown run, capped by an Alex Stank two-point conversion gave the Robins the lead.

“The boys said we were going to punch it in right away and we did,” head coach Tom Schofield said. “What a run by Josh Heuss, he was not going to be denied, he stiff-armed a guy, ran around him and willed his way into the end zone.”

The ensuing Merrill possession saw the Blue Jays drive inside the 10 yard line, only to be stopped on a fourth-and-one by the Robins’ defense.

“Defense came up huge,” Schofield said. “We dug in our heels, came up with the big plays when we needed them, especially the last one it was very exciting. We never quit in these overtime games, battled til the end, to have three in one season is a crazy thing.”

The game was tied at six at the half, with Antigo finding the end zone courtesy of two-yard run by Heuss, who ran for 110 yards and two touchdowns on the night.

“Heuss has a motor on him that never stops,” Schofield explained. “He is always going to run hard and downhill, he did just that for a majority of the game tonight.”

Merrill’s first half score came from Nik Zastrow, who finished off a 77 yard Blue Jay drive by taking it to the house from 12 yards away.

Matuszewski capped off the tying drive in the second half with a score on the ground of his own from three yards yards out, as the Robins’ leading rusher on the season added 96 yards on the night, part of a 281 yard ground attack by Antigo.

“The biggest thing that made me happy about this drive is that it was a mistake free drive,” Schofield noted. “You don’t put together 88 yard drives by making mistakes, that’s what we have to shoot for on every drive because that is how it can end up.”

Stank contributed 51 yards from his quarterback position, also completing a key 24 yard pass to tight end Jerome Jones during the tying drive in the second half.

“Biggest thing we look for from Stank is improvement and he showed that tonight,” Schofield said “We need to utilize his running at quarterback, and he did have a nice pass tonight as well, he’s taking steps forward.”

It was the second consecutive start for Stank who will likely make it three next week. Starter Zach Zupon is expected back later this week, but likely too late to get in the work needed to return under center.

Merrill looked to be driving for the winning score late in regulation only to cough the ball up, with the Robins recovering the fumble in their own territory, at the 25 yard line with just 20 seconds remaining.

Stank ripped off a 22 yard run from there, but the game headed to the extra session.

Eddie Collinswoth did crack the century mark on the ground for the Blue Jays, rushing for 103 yards, including a 35-yard touchdown run in the third quarter, giving Merrill its final lead of the game.

Antigo improved to 2-3 with the win, while Merrill dropped to 1-4.

“Everyone on our roster contributed to this win tonight, if they were playing or cheering on the sidelines,” Schofield said. “It’s always a team effort, we put in a lot of work this week and it paid off.”

The Red Robins return home Friday night to take on the Ashland Oredockers, who fell to Medford by a 26-11 final. Just two games remain on the Robins schedule with a trip to Lakeland scheduled for week seven.

“Looking forward to playing Ashland and keeping the momentum going against two teams we know we can compete with,” Schofield added. “I hope we come out with two victories, would be a nice end to the season and give us a winning record.”

Ashland is 2-3 with blowout wins over Lakeland and Hayward.

“You can’t look past anyone,” Schofield said. “They’ve had some big wins, they will be a solid team and well-coached.”