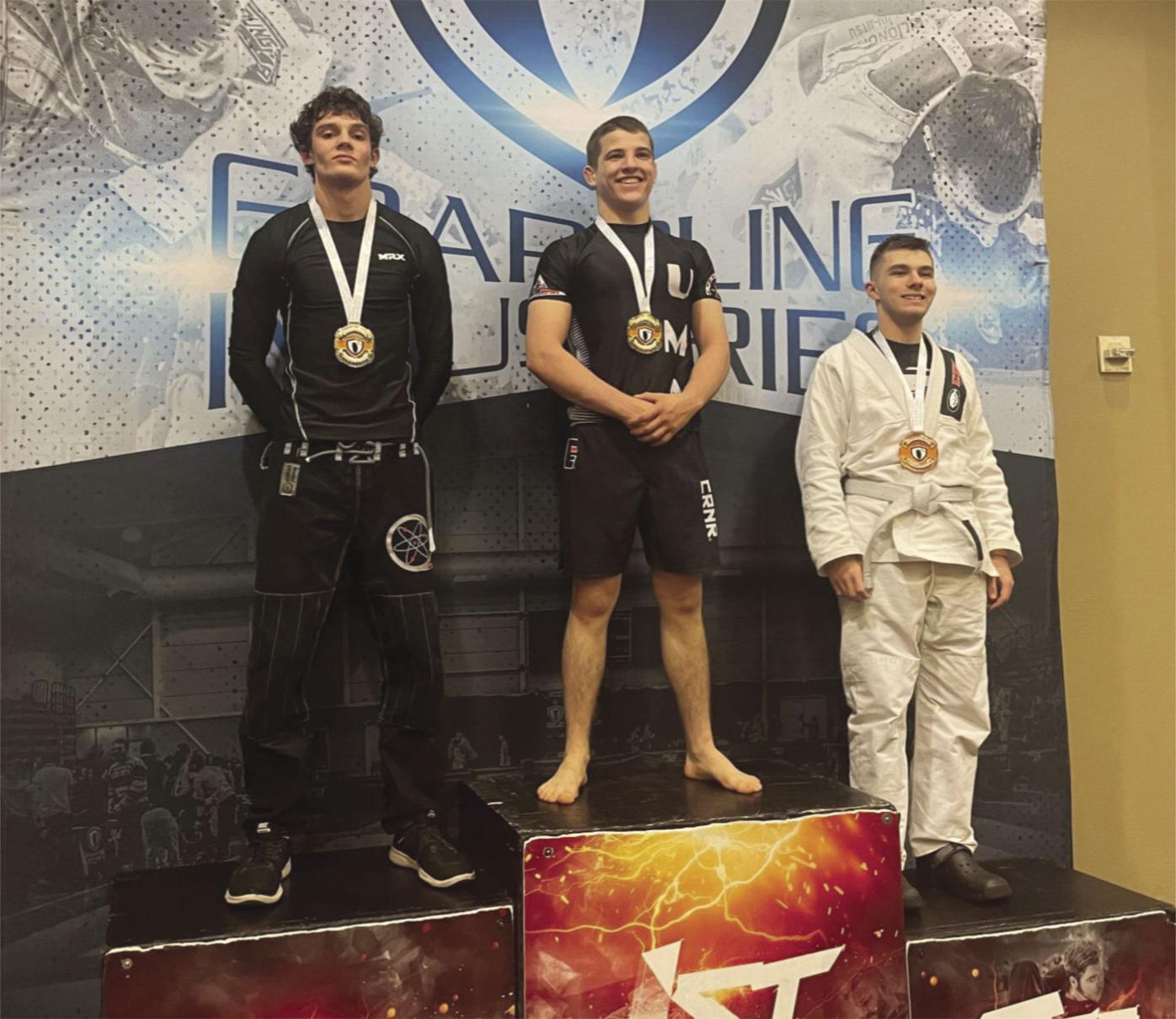 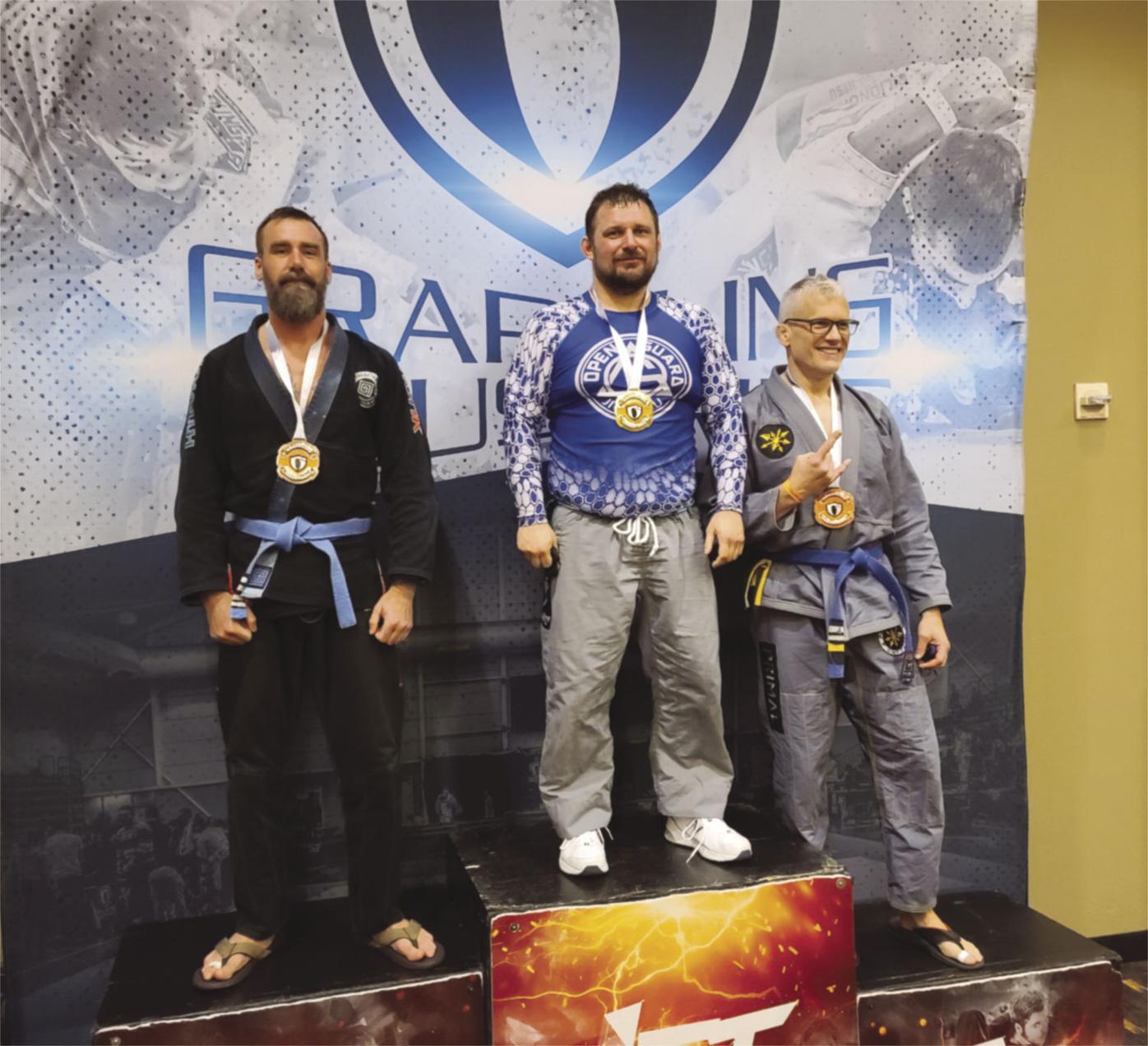 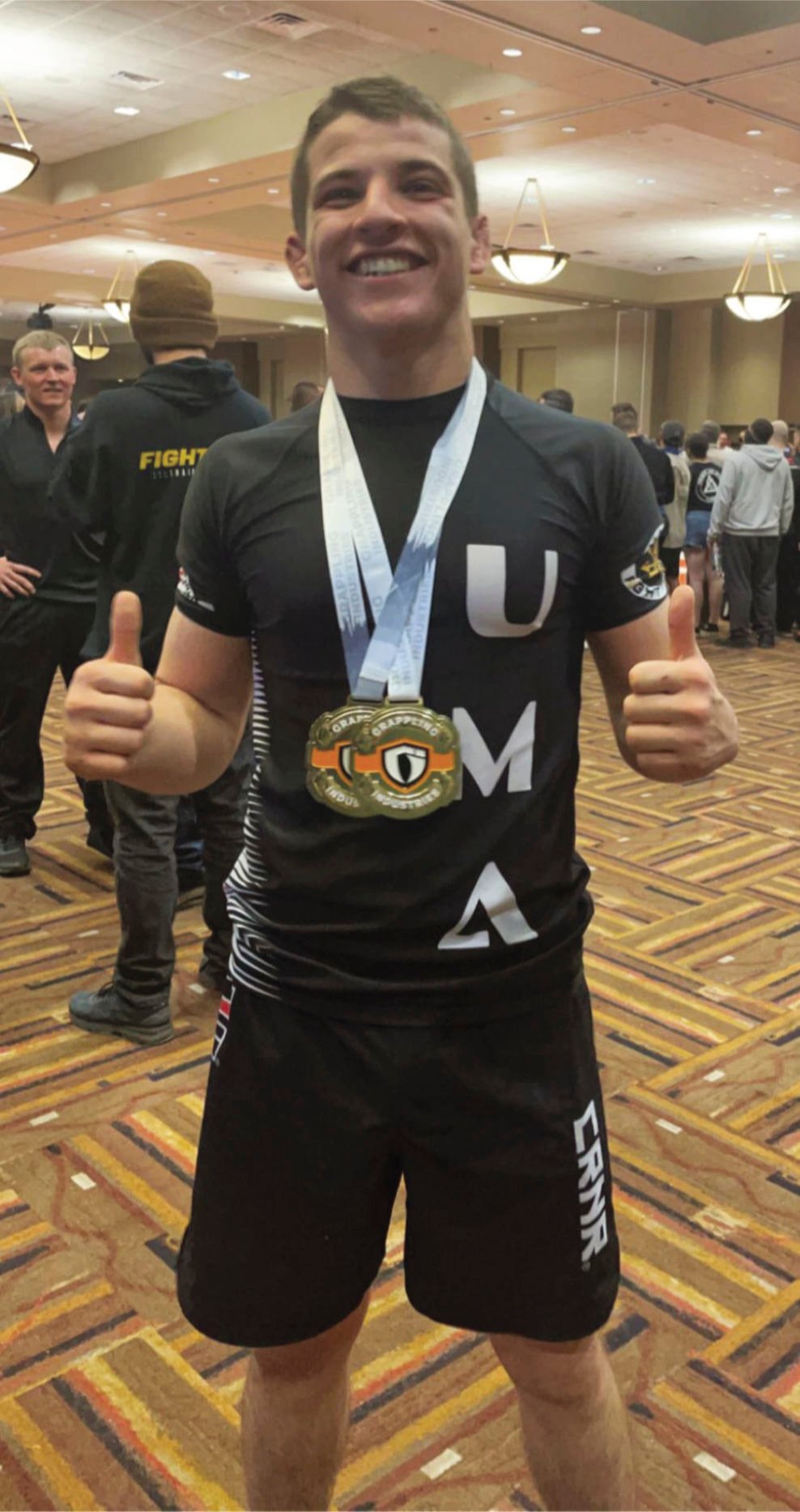 Gideon Sass with his medals secured during a Wisconsin grappling event this past weekend in Wisconsin Dells. 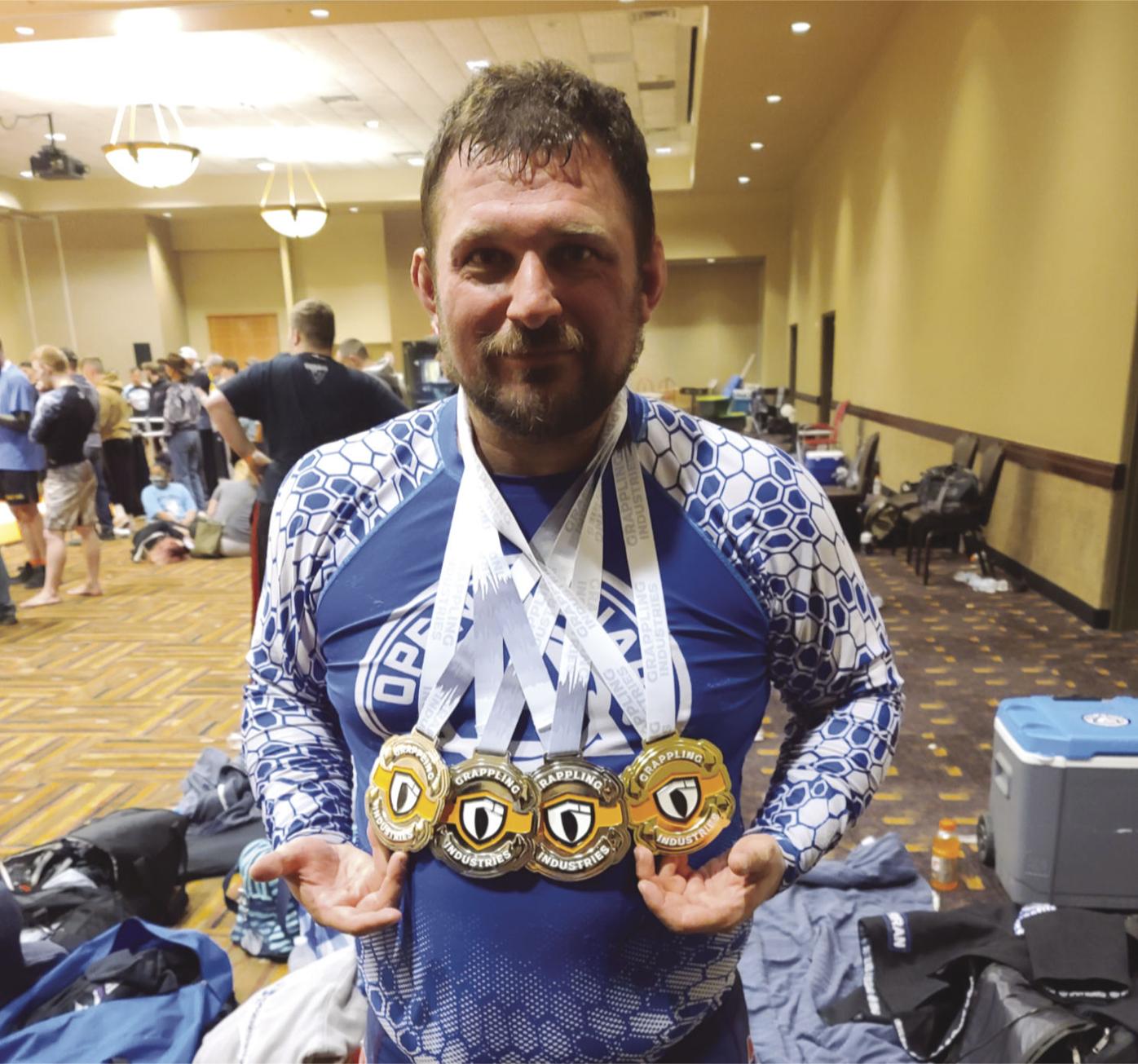 Jason Hohensee displays his medals won during a Wisconsin grappling event this past weekend in Wisconsin Dells.

Gideon Sass with his medals secured during a Wisconsin grappling event this past weekend in Wisconsin Dells.

Jason Hohensee displays his medals won during a Wisconsin grappling event this past weekend in Wisconsin Dells.

Antigo’s Gideon Sass was able to get the gold medal in both of his brackets, and Jason Hohensee secured one gold medal and a trio of silvers.

Sass’s day started in the Gi Kids White Belt division at 170 pounds. In his first match, Sass was able to control the match, using a take down and guard pass to win via a 3-0 score against Samuel Zaccanti of Core Combat Sports.

Sass then secured a submission victory over Giovanni Hernandez of Tracks BJJ using a Dave Schulz choke in only 14 seconds.

In the fourth round, Sass was able to defend a triangle attempt, but eventually submitted via armbar to Joseph Pisani of Arete Martial Arts Academy.

Because there were six people in Sass’s bracket, and not everyone matches up with everyone, Sass’s three wins were enough to advance him to the finals. In the championship match, he garnered a rematch with Pisani, and this time won by a score of 3-0. Sass finished his day in the gi with four victories, one defeat, and a hard-earned gold medal.

For no-gi, Sass had a five-man bracket, making it a true round robin. In the first round, Sass once again met up with Pisani, this time defeating his rival5-0.

In the second round, Sass defeated Jace Huff by a score of 9-0.

Sass’s last match of the day was an Americana submission victory against Emilio Lopez of Wanderley Jiu Jitsu.

His perfect 4-0 record secured another gold medal. 8-1 on the day, Gideon is looking forward to stepping up to the adult divisions in his next competition.

Jason Hohensee’s day started at 9 a.m., with a match against Mark Whittemore, a blue belt from Green Bay Jiu Jitsu. Later in the tournament, Mark went on to win the No Gi Adult 185 bracket, and took second in the Gi Adult Blue Belt 185 bracket. Hohensee was able to secure a takedown using a body lock and won his match with Whittemore 2-0.

In the semi-finals, Hohensee’s opponent failed to show up, so he advanced to the finals against John Gutta of Tipping Point BJJ. Gutta used a neck crank from rear mount for the submission victory at 3:33.

Hohensee then competed in the Absolute Gi Blue Belt Master division. In the first round, Hohensee secured several guard passes and attacks from side control, winning a 6-0 decision against Ryan Sample of Highland Fight Systems.

In the second round, Hohensee faced Aaron Bixby of Primal MKE. Hohensee began with a takedown, passed to side control, and then tried a series of papercutter chokes. These chokes opened up an opportunity to attack the arm, and at 2:30 Hohensee was able to garner a far side Americana submission for the victory.

The victories put Hohensee in the finals against Nicklaus Metnik of Ronin Fitness. Hohensee collected a gold medal with a 6-0 victory.

In the first round, Hohensee faced Devin Shade of Red Schafer MMA. Hohensee won on points 2-0.

The second round saw Hohensee face Anthony Kromvig of The Academy MN. Hohensee was able to secure the takedown, pass guard, and transition to knee on belly, winning a 10-0 decision.

In the third round, Hohensee faced Manny Hill of Tracks BJJ. Hohensee once again dominated the match, winning by a final score of 14-0.

In the fourth round, Hohensee matched up with Andrew Henschel of Resurgence MMA / Wanderley Jiu Jitsu. Henschel was also 3-0, making the match for the championship. Henschel was able to secure a decision victory. Hohensee went 3-1 in the bracket, earning the silver medal.

Hohensee’s fourth bracket No Gi Master Advanced 230-pound division. Hohensee first matched up with Jordan Seufzer, who was competing under Nova Gyms BJJ in the first round. Hohensee countered a couple of shot attempts and dominated most of the match from side control in route to a 7-0 victory.

Hohensee’s second match was a rematch with John Gutta, with the latter securing a 12-2 victory.

Hohensee’s final match was against Dan Sauer of Wisconsin 360 Jiu Jitsu. Hohensee won via a combination shoulder crank and side choke. With the victories, Hohensee grabbed another silver medal.

On the day, Hohensee was 9-3 and Sass was 8-1. The UMA North crew enteredsix divisions, placing top two in every one, and finished the day with a won-loss record of 17-4.

Anyone interested in Jiu Jitsu, Kickboxing, or Mixed Martial Arts is encouraged to stop by Unified Martial Arts North at 834 5th Avenue in Antigo for more information.