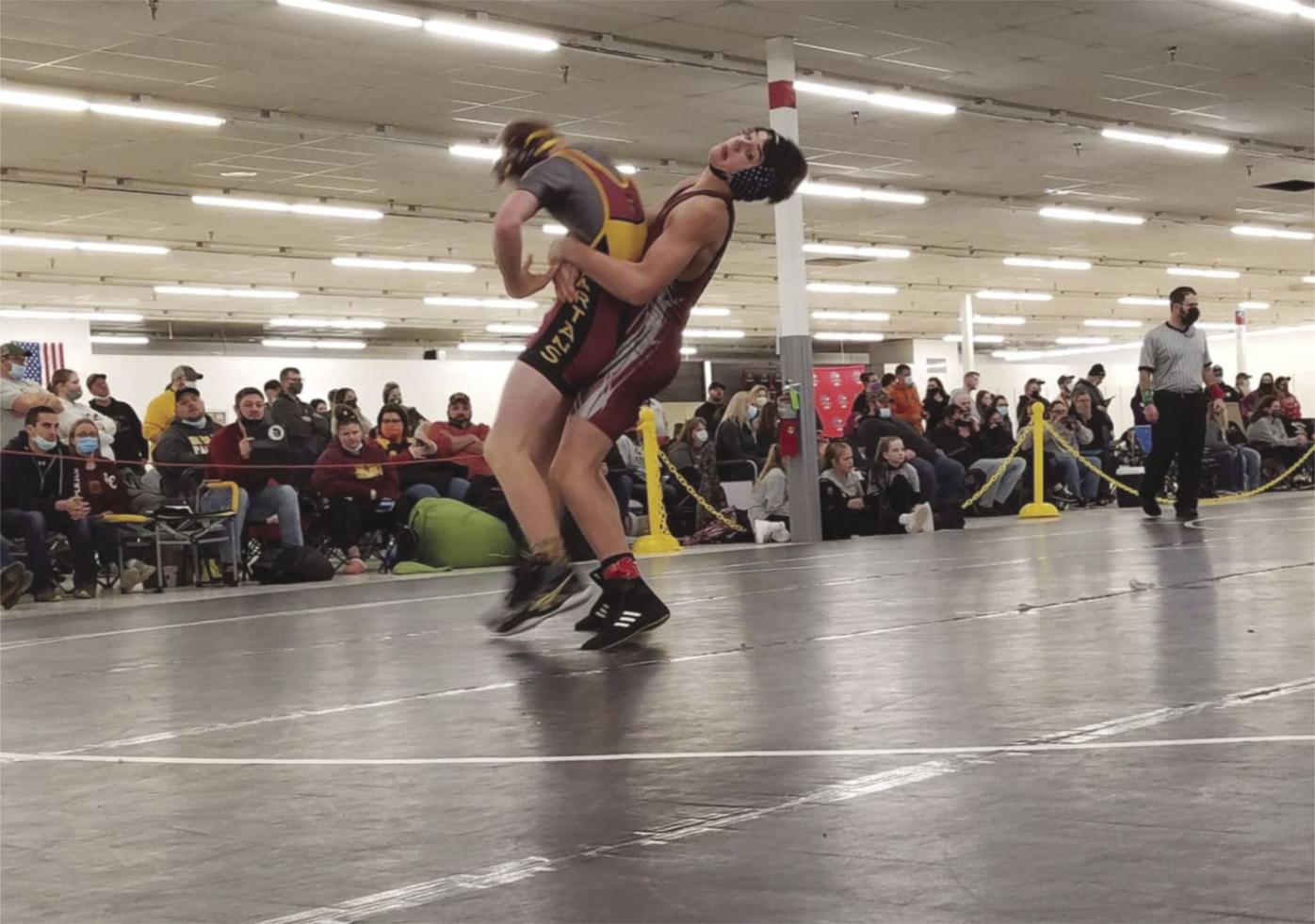 Nolan Kielcheski of Antigo, right, has a hold of Luxembourg-Casco's Andrew Klay Saturday in Oconomowoc.  Kielcheski lost a hard-fought 6-3 decision. 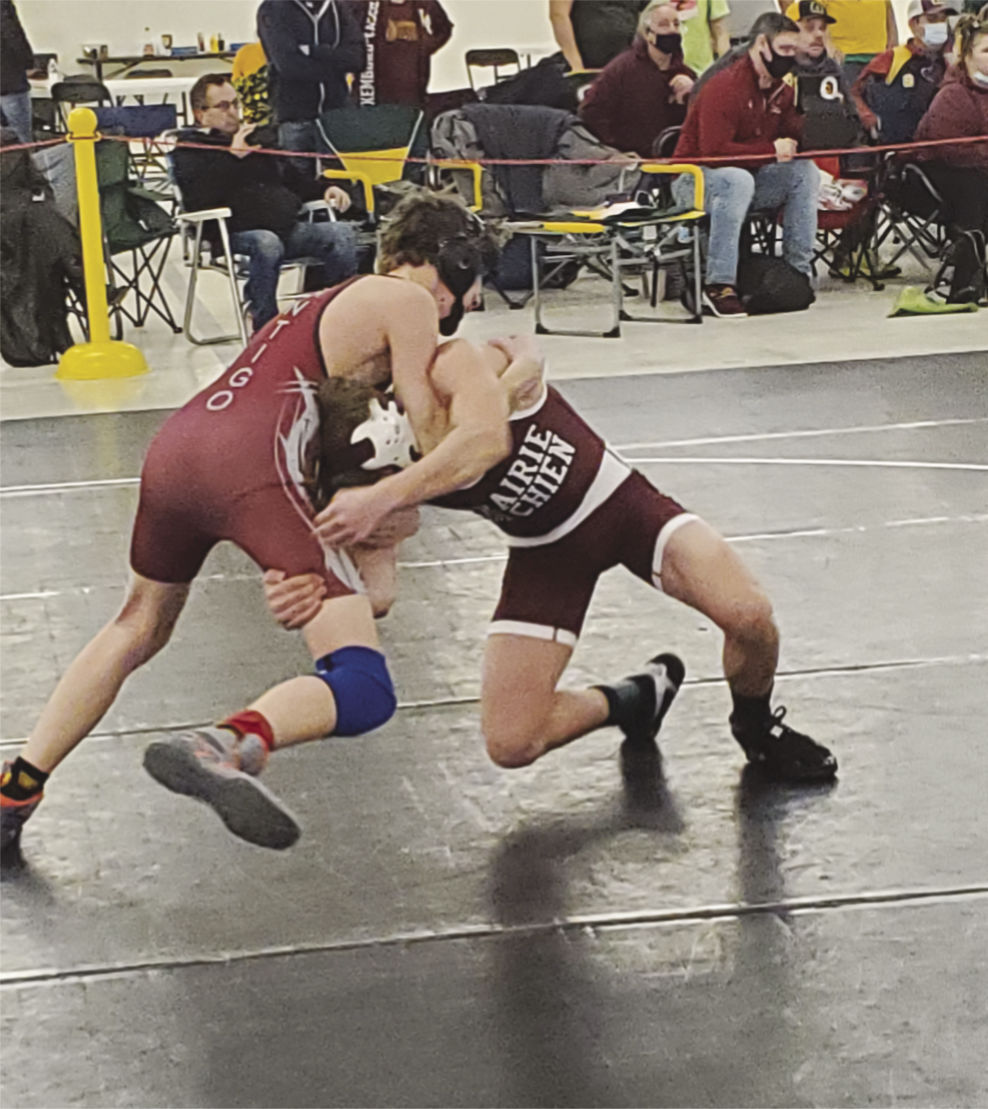 Nolan Kielcheski of Antigo, right, has a hold of Luxembourg-Casco's Andrew Klay Saturday in Oconomowoc.  Kielcheski lost a hard-fought 6-3 decision.

A young but feisty group of middle school age Antigo wrestlers traveled to Oconomowoc for a team tournament on Saturday, under the direction of coach Joe Pregler.

The fledgling Red Robins were not able to secure a team win in any of their dual meets, but showed plenty of spirit in battling every match to the very end.

The team started the day with a tough assignment, taking on powerhouse Luxembourg-Casco and falling by a 57-10 final score. In a big highlight of that dual, Antigo’s Jayson Arrowood defeated Luke Driedric in a 12-2 major decision.

Caleb Vandenlangenberg picked up the other Antigo win when Dylan Legrave was forced to default with an injury. Nolan Kielcheski fought hard for the Robins but fell by a 6-3 decision. Aidan Kielcheski, Mike Hofrichter, Logan Meidl, Scotty Hagerty, Zander Martinez, Jordy Pregler, Samson Smith, and Jack Sundermeyer were all defeated by pinfall. The Robins had to forfeit in the 77 pound weight class.

Antigo clashed with Freedom in the second dual of the day, again falling on the short end of a 49-18 score.

This time Mike Hofrichter put the Robins in the win column with a pin of Layne Everson.

Nolan Kielcheski followed with a a pinfall victory of his own, dispatching Nixon Heinke. Arrowood made it three Antigo pinfall wins with his second of the day, defeating Gavin Prodell.

Jack Sundermeyer made a strong push for another Robin victory, but came up just short against Connor Verhasselt in a 9-7 decision. Hagerty had his hands full with Owen Lowney, but refused his opponent the satisfaction of a pin by battling to a 9-0 major decision loss.

Things got no easier for Antigo in the third dual, with another powerful opponent in Prairie du Chien. The Robins lost this dual in a 50-15 final.

Hagerty moved himself into the win column this time around, scrapping out a 5-4 decision victory over Austin Voight. Nolan Kielcheski scored his second pinfall win of the day, setting down Andrew Geisler. Arrowood nearly notched a third positive result, but his match ended in heartbreak with a loss on a takedown in sudden victory.

Antigo’s closest dual was the last, ending in a 36-30 loss to Mineral Point. The Robins won five matches by forfeit, while losing six via pinfall.

Several of the young Robins competed in individual matches outside of the duals.

Pregler secured three pins against Freedom opponents during individual action, two over Mason Calmest and one over Walker Westphal.

Smith defeated Freedom’s Trent Nabbefeld with a pinfall. Hagerty scored a 7-4 decision over Zaender Schoenbeck of Luxembourg-Casco. Nolan Kielcheski capped his impressive day with a 7-6 decision over Fenimore’s Ryder Zdanczewicz.

Max Kneeland finished 1-1 in his individual matches, highlighted by a 4-0 decision over Owen Blange of Luxembourg-Casco. Blange fought back with a 6-0 decision win over Antigo’s Olivia Hofrichter. Martinez and Mike Hofrichter each lost by pinfall during individual action.

The middle school Robin grapplers will spend the next two weeks preparing for the individual State Tournament, which is organized by birth year.